Why Your Device and Your Charger Should Talk Over BLE

An increasing number of devices are shedding their cords, becoming more portable and more convenient to use, like the should-be-here-any-minute-now Ap...

An increasing number of devices are shedding their cords, becoming more portable and more convenient to use, like the should-be-here-any-minute-now Apple AirPods and other hearables and headphones. But the act of charging, for the most part, still has people reaching for a wire to plug into their smartphone, tablet, laptop, or any device that is otherwise wireless. Wireless charging has been around for quite a few years, but is still mostly a novelty. It is not supported by all new devices, and the availability of public charging surfaces is limited to a handful of locations, like a few select coffee shops.

Maybe this is about to change. One of the impediments on wide adoption of this technology is the lack of a unified standard. Until recently, big players have been shifting between induction charging, resonance charging, and other technical specifications. This is quite typical of early stages of technology, like the battles waging between the different IoT connectivity protocols. But since last year’s merger of the Alliance for Wireless Power (A4WP), formerly called Rezence, and Power Matters Alliance (PMA), forming the AirFuel Alliance consortium, unification seems to be getting nearer.

Another factor driving the demand for wireless charging is the plethora of new wearables and hearables. These devices have more to gain than simple convenience. First, due to an extremely small form factor – for example, of an in-ear hearable – the removal of the connector port is very significant. It makes the design simpler and the device smaller and lighter. Second, eliminating the connector enables the manufacture of a sealed device, making the task of waterproofing and dustproofing much easier. For items that are worn on the body in all kinds of weather and environments, that’s a substantial advantage.

These factors are certain to encourage more inclusion of wireless charging technology in new devices. In turn, that is likely to make wireless charging surfaces more ubiquitous, finally making the feature more useful and desirable to consumers.

One surface to simultaneously charge phone, wearables, and more with A4Wp profile 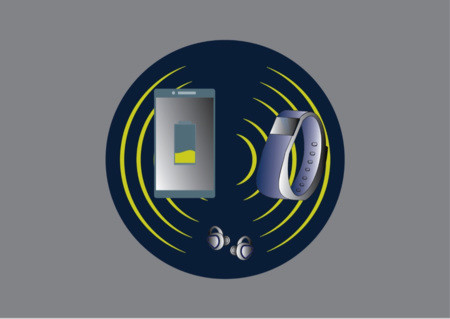 One of the many considerations in specifying a standard for wireless charging is choosing an efficient communication protocol. The charger and the device must exchange some parameters, namely battery type and charge level, for optimal charging efficiency. Among other things, the charger should know when the device is full so the charging can be minimized to avoid power waste. This purpose can be served by several protocols. One of the options that has been explored is to use a short range wireless communication, such as NFC. But, the main drawback of NFC is that it only serves point to point communication, while wireless charging may need point to multi point communications so several devices may be recharged in parallel, sitting on the same charger.

Therefore, the decision was eventually made to use Bluetooth low energy (BLE). For this purpose, a new BLE profile has been defined, called A4WP profile, which is managed by the AirFuel Alliance. An additional advantage of using a BLE-based design is that most of these wearable devices already contain BLE wireless technology. Hence, if the device doesn’t already support NFC for other purposes, there is no need for an additional dedicated radio just for charging.

The A4WP BLE profile is a relatively simple and standard Bluetooth protocol. It enables a bidirectional control link between the transmitting and receiving units. The link enables accurate control of the charging process and correct and efficient delivery of power. The A4WP profile also simplifies the connections process by using the Bluetooth Low Energy Generic Attribute framework (GATT). This allows devices to pair based on their proximity, without the need for manual intervention.

For now, it is still uncertain which wireless charging technology will be the predominant standard. In the interim, many OEMs are opting for multimode support so they are prepared for any case. As far as communication goes, the A4WP BLE profile offers some significant advantages by utilizing existing technology to support multiple simultaneous links. What remains clear is that it is about time to lose the cords as the world becomes smarter and more connected.

Franz Dugand is Director of Sales & Marketing at CEVA’s Connectivity Business Unit. He is in charge of expanding the CEVA Bluetooth and Wi-Fi product lines into various market segments such as mobile, consumer electronics, gateway, healthcare, industrial and other IoT applications.