The Past, Present, and Future of PC104 for Small Form Factor Designs

A typical stack may contain a CPU board, a power-supply board, and one or more peripheral boards that serve a specific purpose. Such boards are available from a host of vendors. And many OEMs design their own peripherals boards if specialized functions are needed.

The spec, originally developed through the PC/104 Consortium, has evolved over time to keep up with the latest available technologies. It defines the form factors and the buses employed, with the pin-outs. Products that fit this category are intended for rugged industrial and military applications. Originally, two versions were defined, one at 8 bits and one at 16 bits. The latter, being more popular, contained 104 pins. Hence, the “104” designation. It came in at 3.550 x 3.775 in., or 90 x 96 mm, which offered a nice alternative for OEMs looking for a reduced SWaP (size, weight, and power).

Originally, most of the available CPU boards available were based on the X86 architecture and ISA bus. Today, a host of Arm-based CPU boards are available from multiple vendors. And it was typical to run a DOS- or Windows-based operating system (OS) back in the day. Today, we see PC104 systems running all versions of Linux and real-time OSs. Later standards, like EBX and EPIC, allowed for larger CPU boards, but contained a PC104 connector, allowing standard I/O boards to be employed. 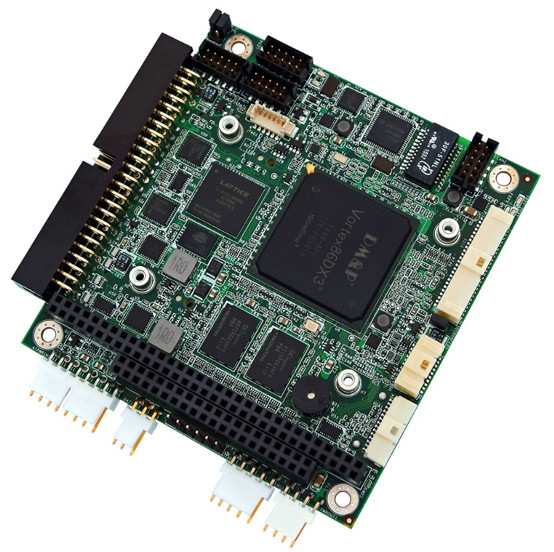 The WINSYSTEMS’ PCM-C418 SBC is designed to the PC104 form factor. It offers a low-power spec thanks to the use of a DM&P Vortex86DX3 SoC processor.

When higher performance was needed from PC104, the PC104-Plus architecture came into being. This incarnation added 32-bit PCI connectivity, giving OEMs higher speeds while maintaining backward compatibility to existing boards. This was followed by the PCI-104 spec, which is essentially PC104-Plus without the PC104 ISA connector. Products fitting PCI-104 are still available. However, they require the use of a PCIe-to-PCI bridge.

Moving forward, PCIe/104 added PCI Express signaling. This spec originally focused on high-performance CPUs with what is now known as the PCIe/104 Type 1 specification. It permits x16 PCIe lanes on the three-bank, high-speed connector. A PCI-104 connector can be included as well. A future version of this spec (Type 2) allowed for other types of I/O, so designers could move both up and down the CPU performance chart. This is likely the most commonly utilized standard for PCI Express on PC104.

Even with the Type 2 pin-out, many CPUs couldn’t utilize the full three-bank, high-speed connector. So the PC104 consortium approved the Type 3 (OneBank) connector option.  OneBank supports the signals of the first bank on the Type 2 pin-out and depopulates the remaining two banks, which were largely unused I/O. This saves real estate on the PCIe/104 CPU, allowing for additional functionality or reduced costs.

A great example of that OneBank architecture can be seen in the WINSYSTEMS PX1-C415 SBC. It’s takes advantage of Intel’s Atom E3900 series SoC processor. Thanks to the OneBank expansion, it can operate as a standalone SBC (no carrier board needed). The backward compatibility of the spec allows for the use of a slew of expansion modules, while still maintaining a small, rugged form factor. And OEMs can design their own modules if necessary.