Embedded motion engineers have to know how the smart electronics get placed within the physical structure (“embedded”) and how each component moves relative to each other (“motion”). In this...

Embedded motion engineers have to know how the smart electronics get placed within the physical structure (“embedded”) and how each component moves relative to each other (“motion”). In this article, I’d like to discuss how we describe and model the latter term, motion, which we often take for granted as being quite simple.

When we design motion systems, we ask things like:

To answer these questions with high technical predictability, we often enlist trusted kinematic and dynamic models. Sometimes the models we find in the Machinery’s Handbook, the Engineering ToolBox, Wikipedia, or elsewhere on the engineering web will be sufficient models for our scenario. Sometimes, they don’t hold water, and we need a model with stronger predictive capabilities.

An oft-quoted engineering saying goes, “All models are wrong. Some are useful.” No doubt, the tenet also applies to 3D motion. Some kinematic and dynamic models can be appropriate in one scenario, but insufficient in other scenarios.

The diagram below shows a simple gear system. The bottom rack is driving the two gears and another rack. Let’s assume the centers of the two gears are fixed, so that the gears are only rotating, and the top rack is moving in the x-direction. If the bottom rack is moving at ν1 = 1mm/s, how fast is the top rack moving (assuming no loss in the gears)? 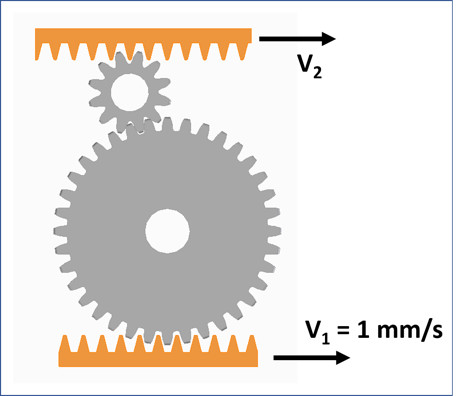 It turns out the equations we need are quite straightforward. We can easily define angular information in this example:

By essentially treating this system as 2D, we’re safe to use ν = τω in our analysis. Applying the relationship to design our system yields that ν2 = ν1.

What do we do when we encounter 3D motion systems that have parts rotating in more than one direction and not about their center of mass? How do we define the angles? What is the angular velocity?

The motion of a quadcopter is a suitable example of a more complicated 3D motion system. For a quadcopter, we want stable control over its position (“Where is it located? How fast is it going?”) and orientation in space (“What’s the ‘tilt’ angle?”). It’s possible for a quadcopter in flight to translate in x, y, and z directions and rotate about x, y, and z (where x-y-z are three orthogonal directions fixed in the space).

To keep the quadcopter stable, we’ll use a gyroscope to measure the angular velocity about each axis, and feed that information back into the control algorithm. A 3-axis gyroscope will spit out three values for angular velocity, but note that these angular velocities correspond to axes that are fixed on the quadcopter. These x-y-z axes are not the same as the x-y-z axes that relate back to the quadcopter’s position, velocity, and acceleration in space. The conversion, so to speak, of the gyroscope’s output into something digestible by the control algorithm is where the 3D dynamics model comes in handy.

Getting started with a more powerful 3D model

A more robust model of 3D motion starts with: 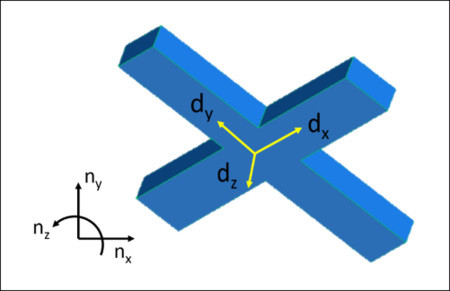 The measurements from the gyroscopes will give us angular velocities about d̂x, d̂y, and d̂z, and for the control algorithm, we’ll want to know how these values relate to meaningful angles in n̂x, n̂y, and n̂z. One way to achieve this is by defining the quadcopter’s orientation with a series of simple rotations about axes fixed on the quadcopter body. At the beginning of this step, we can express the angular velocity of the quadcopter in d̂x, d̂y, and d̂z, and it will look something like this:

At the end of this work, we’ll use rotation matrices to express each of the angular velocities in terms of Euler angles. Euler angles provide us one way of precisely describing the orientation of a body in 3D space. (Note that Euler angles don’t necessarily correspond to what we call yaw, pitch, and roll.) We will finish with precise expressions for ω1, ω2, and ω3.

Since the quadcopter can rotate about more than one axis, we no longer have a simple ω1 = θ̇ relationship, and we can’t use ν = τω to generally describe the velocity of a point on a quadcopter. In fact, an equation for ω1 looks like ω1 = φ̇ = cos α + α̇ - θ̇ sin φ where θ, φ, and α are the Euler angles. The equations for ω2 and ω3 are no less messy, unfortunately. In short, it’s easy to see how the definition of the 3D system extends beyond what we find in traditional dynamics resources. For more details on these calculations, see the extra credit section.

When we model complicated 3D motion phenomena, it’s key to distinguish between scalar and vector quantities. Remember, a vector has both a magnitude and direction (e.g., 25 mph in the northeast direction), while a scalar is something that just has a magnitude (25 mph). When we bring into our model other physical values (velocities, accelerations, linear and angular momentum, forces, torques, and so forth), we should first think of them as vector quantities. For instance, when we talk about torque, it’s useful to specify both its direction (e.g., about the positive z-axis), as well as its magnitude (5 N-m).

The benefit of using a more complex model is that you can precisely define all the quantities related to angles (the orientation, angular momentum, moments, and products of inertia, and so forth) for any motion system made up of rigid bodies. The equations can get gnarly, so it’s often wise to use software programs like MATLAB, Working Model, or MotionGenesis.

Note that if I were following the 3D model methodology in my gear example, then I would explicitly treat the velocity and angular velocity as vector quantities. But again, the motion in the gear example  fits my criteria for simplifying down to 2D kinematic equations, and I avoid the time-heavy definitions of a 3D model. If I have a more complex motion system, then I must treat the kinematic and dynamic quantities as vectors, or I risk having a poorly predictive model.

Precisely modeling the motion of a system can be a tricky thing, but by constructing a robust model we can more quickly respond to broader concerns. If we desire to make a stable motion system that is functionally robust, smooth, and elegant, then we have to decide which model is more appropriate. As engineers, it’s critical for us to realize the limitations of the commonplace 2D equations, and that there are other appropriate tools to solve 3D motion systems.

Here is one way to precisely define rotational information for the quadcopter: 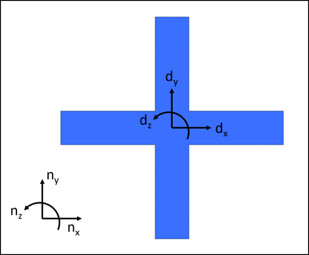 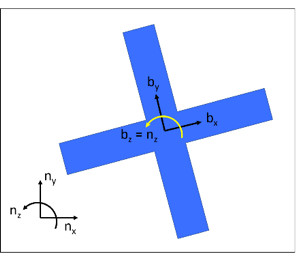 We will then rotate about another fixed axis on the body, d̂y, and we’ll call this new intermediate reference frame C. Initially, ĉx = b̂x, d̂y = ĉy = b̂y, and ĉz = b̂z. We’ll rotate by angle +φ  about ĉy. We can then write that C’s angular velocity in B is

From here, D’s angular velocity in N can be expressed as

. However, this expression isn’t very useful yet in putting together dynamic equations. We already know that

because that’s the format of the data coming from the gyroscope. We’d like to re-express this in terms of our global reference frame N. 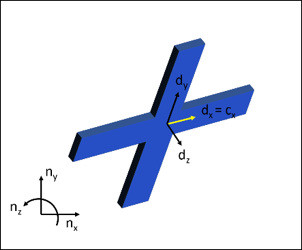 in terms of our defined angles. (I won’t go into details with this part, but it comes straight out of making those intermediate rotations.) The result is the following:

Note that we can arrive at an expression for ⍵1, ⍵2, and ⍵3 and  in terms of  θ, φ, and α and their derivatives (as shown in the main part of the text) by expressing this equation in terms of in d̂1, d̂2, and d̂3. Additionally (by doing some more rearranging), we can express each of the Euler angles in terms of ⍵1, ⍵2, and ⍵3. For example:

Alas, our first step in giving a precise definition for the angular velocity of the quadcopter and making it usable by the control algorithm is complete.

Josh Siegel is a mechanical engineer at Simplexity Product Development, an engineering services firm that specializes in the development of embedded motion products. He holds a BS in Biomechanical Engineering and an MS in Mechanical Engineering from Stanford University. He specializes in mechatronic and mechanical system design, and he is passionate about how we can best leverage technical tools to inform design decisions across the entire product development process. He writes about mechatronics, product development and technology on the Simplexity Product Development blog.