The critical mass has formed and VDC has segmented out the ?IoT Engineer? as its own marketplace because of this markedly different set of requirements for IoT systems and applications development.

Over the past year, I’ve written a couple of pieces about a new breed of engineer that spans embedded, network, and cloud skill sets. Earlier this year, I wrote a blog about IT services companies promoting combined embedded and IT staff, frameworks, and services. I also did some research into staffing organizations and their efforts to actively address these hybrid positions.

VDC Research has recently released a couple of interesting research reports that provide critical insight into this trend and its impact going forward. The critical mass has formed and VDC has segmented out the “IoT Engineer” as its own marketplace because of this markedly different set of requirements for IoT systems and applications development.

The IoT Developer/Engineer Census and Analysis report conducts polls and interviews with the global embedded/IoT engineering population relating to what kinds of challenges are being faced and the kinds of tools, software, hardware, and frameworks are needed to address them.

Together, these research reports are signpost that show IoT blurring the lines between enterprise IT and embedded. I talked with Roy Murdock, a VDC Research analyst and one of the authors of the research, to discuss the trends he saw and important takeaways from his research.

Why did you do this study?

Murdock responded, “Actually, the Census and Voice of the IoT Engineer reports are part of a track of end user studies we have been doing for over 10 years, and even longer if you include our first surveys of the embedded community in the 1990s. The survey and studies started as strictly an embedded software engineering census, but over time we noticed the responses and skill sets of embedded and IT started merging. Things were creeping into the responses involving corporate network skill sets, WAN/LAN network, cloud services, security, and IT challenges. On further review, we found the driver was the IoT.”

The studies segment embedded and IT, then gives growth rate trends and projections. VDC defines an IoT engineer as someone who works on a project that includes networking and connectivity technology to enable the exchange of data, communication, and services between devices, machines, and/or network infrastructure to the backend/cloud. 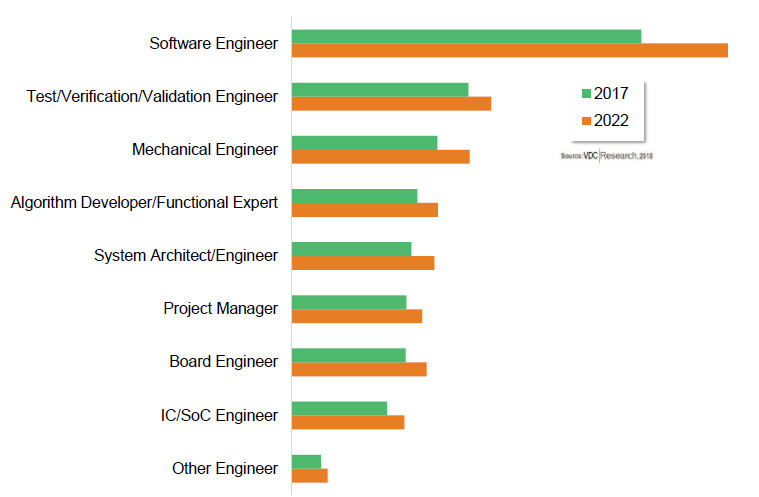 The research contains the specifics, but Roy mentioned over 55% of the embedded population are now employed as IoT engineers. “The majority of embedded engineers are now working on connected projects with cloud and/or IoT involvement in some way.”

Murdock had some very interesting insights on where embedded and IT engineering skillsets are heading. “Key tools these IoT engineers use include, more recently, IoT cloud Platforms-as-a-Service (PaaS). This is driving the need for new skills. Amazon Web Services (AWS) IoT, GE Digital Predix, Microsoft Azure IoT Suite, PTC ThingWorx, and Siemens MindSphere are examples of IoT platforms that these engineers are using to drag, drop, connect, analyze, and develop applications for IoTsystems. These environments require engineers to know their way around IT networking as-a-service, security, and API integration. Strong vertical domain knowledge of the enterprise and their products and services is critical. These aren’t skills that are being taught in school – they are emerging skills that are resulting from socializing OT and embedded engineers with IT and cloud developers within these IoT projects.”

“In the IoT it’s often critical to understand the embedded device and what data is being generated. One example of change in recent years has been the adoption of Python, which was used sparingly on embedded projects in the past for scripting and testing, but rarely implemented in the embedded projects themselves. Our most recent embedded surveys and studies show that Python is now being used regularly to clean, transport, and manipulate the data that could reside in the cloud or on IoT gateways. The data science discipline is also becoming a key skill set within the embedded domain as analytics add greater differentiation to IoT systems and applications,” Murdock said. 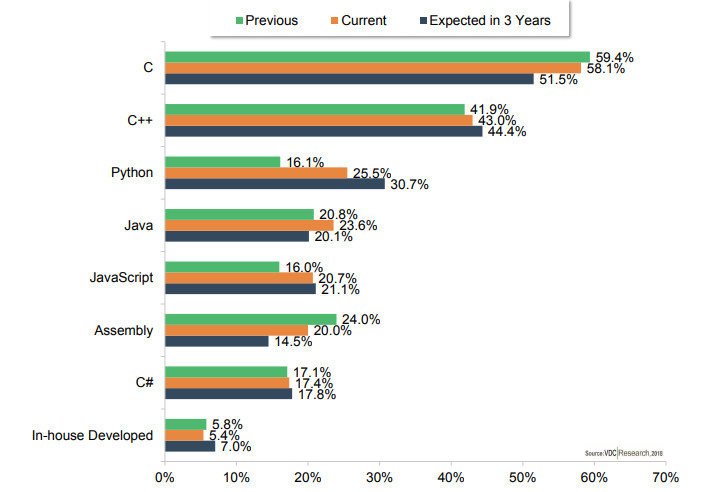 [Voice of the IoT Engineer: Languages Used to Develop Software in Previous, Current, and Future Project (Percent of Respondents)]

While there is a significant element of embedded and real-time implications to many IoT systems, Murdock mentioned the IT engineers may be better positioned to cross-over into these embedded IoT engineering roles. “IT and enterprise developers usually understand data analytics and data wrangling already, albeit from different enterprise networks and data sets. This may give them an inside track to apply these same patterns and paradigms to IoT systems residing in these cloud services and IoT gateway platforms” Still, the vertical domain knowledge that embedded engineers often bring is a necessary part of the IoT equation.

Murdock also mentioned there is still the deeply embedded, safety critical system area where safety concerns and strict real-time requirements require traditional embedded engineering skill sets. Automotive aerospace and defense, industrial automation, medical devices, and energy are a few verticals where systems with low latency and real-time guarantees are required. However, many systems within these verticals, such as  auto infotainment, medical wearables, and industrial gateways, are crossing over to be internet connected.

“Yes, another very key skill is security and expertise is always being sited in this area as a need. Engineers who can set up the secure networks, identify threats and vulnerabilities, and provide a security plan for the [IoT] system, both at the hardware and software level,” Murdock said. “However, the willingness to pay for robust security solutions is often another story.”

Unfortunately, Murdock’s observation is a common response I’ve heard in many industries. Security is something that everyone knows is important, but hard to quantify value and until something bad happens, little money is allocated.

“The studies are geared toward giving the reader a sense of the embedded and IoT population. From there, we look at different embedded roles such as project managers, algorithm engineers, mechanical engineers, etc. We then further break these out into nearly a dozen vertical categories and perform forward projections based on a mix of primary and secondary data, and the identified trends.”

Vertical market break-outs are also performed as well as geographical segmentation in terms of who is working on what role in which region for each industry.

Another interesting takeaway is the tool attach rates. What tools are being used and attach rates for IDEs, prototyping solutions, and static analysis tools with many other tool types covered and forecasting those out to 2022. I found it interesting that tool adoption has reached critical mass enough to perform attach rate analysis.

Murdock also had some interesting thoughts on the three to five year horizon of embedded and IoT. While there will still be separate embedded and IT disciplines five years from now, there will be increasing pressure for these IoT mixed skill sets with significant payoff.

“Skill sets and value are being condensed into fewer and fewer engineers,” Murdock observed. “For example, Intel acquired Mobileye for $15.3 billion. Mobileye employed fewer than 500 people at the time of the acquisition. These high dollar M&A numbers with increasingly fewer people are a sign of things to come with more and more value locked into fewer skilled IoT employees. People able to get into the most domain specific roles like Mobileye has in the auto industry and extend skills from embedded to IT or vice versa will drive the lion’s share of value going forward.”

More information on these VDC Research studies can be found at: