In this article from Teguar Corporation, learn about the requirements and implementations of vehicle mounted computers.

Vehicle mounted computers must be able to connect to the vehicle battery power. If set up incorrectly, the connection between the computer and vehicle battery can have negative consequences for both. For the following discussion, assume that the power being supplied by the vehicle is within the voltage tolerance of the computer, as most vehicle computers have a wide range voltage input (9~36V or wider).

The computer needs to automatically turn off when the vehicle is shut off, but, shutting off power to the computer while it is running is not good practice. Each time power is suddenly removed from a computer, you run the risk of corrupting the filesystem. When this happens, the computer will fail to boot and the hard drive or SSD will need to be reimaged or replaced. In order to protect the computer's file system, the computer must perform a graceful shutdown.

There are a few different methods to prevent vehicle battery drain and also protect the computer's file system. The two most common methods are explained below.

The other method is to select a computer with an integrated battery. Tablets have integrated batteries and many touchscreen computers have optional integrated UPS backup batteries. These batteries can communicate their charge percentage and other information to the operating system. The operating system can then automatically perform a graceful shutdown when the battery is near depletion. This battery support is built into Windows and you may see this on your personal laptop when the battery is almost dead.

Both of these methods work well for protecting vehicle batteries and the computer. The ignition input implementation is most common with box PCs and in extreme conditions such as agriculture machinery and outdoor vehicles. This is largely because box PCs can have wider temperature ranges than computers that include batteries and LCDs. The internal battery implementation is more common with touchscreen computers and tablets for applications such as forklifts, cranes, and in temperature controlled areas. These applications benefit from the simplicity of the power wiring and the flexibility of having a single all-in-one touchscreen computer.

View our lineup of vehicle mountable computers at www.Teguar.com 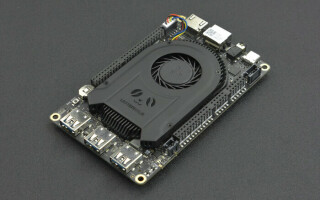