Recent advances in hardware and software have made it possible for compact, battery-powered products to include always-on voice command systems.

This is part two of a three part series. Read part one here.

Recent advances in hardware and software have made it possible for compact, battery-powered products to include always-on voice command systems, which have already proven their reliability and appeal in tens of millions of smart speakers. This paper describes new applications, techniques, hardware, and software that will make these products possible.

The core of the hardware for a voice command interface consists of a microphone array and a processor that can receive and interpret the audio signals from the microphones. Depending on the type of device, various other components may be needed, such as a wireless interface for Bluetooth Low Energy or WiFi, plus speakers, amplifiers, LEDs and displays to provide user feedback.

Although it is possible to use a single microphone in a voice command product, most such products use a beamforming array of two to seven microphones. The array allows the audio processor to focus the pickup pattern of the microphones on the user’s voice, thus improving the signal-to-noise ratio of the user’s voice relative to the surrounding environmental noise. Research by DSP Concepts has shown that achieving the best possible signal-to-noise ratio is critical to the accuracy and reliability of a voice command product. However, the demands placed by the form factors of portable and battery-powered products present many challenges not present in products designed for home use.

However, few portable products and almost no wearables have the space for such an array; true wireless earphones, for example, typically have room for only two mics in each earpiece. Also, the processing power required for such an array may be beyond the capabilities of the relatively small processors used in most portable devices. Therefore, software algorithms that perform beamforming and other voice UI optimization functions must have the capability of being optimized for two or at most three microphones.

Microphone selection: Because voice command products use multiple microphones, the two primary factors in microphone selection for these products will usually be size and cost. However, in portable and battery-powered products, the power consumption of the microphones also becomes important. MEMS microphones are already the standard in voice command products, and their small size, low cost and low power consumption makes their use even more critical in portable and battery-powered products. An additional benefit of piezoelectric MEMS microphones is that they are exceptionally stable and the sensitivity does not shift during solder reflow, humidity or with changes in temperature.

These microphones can feature analog or digital output, but analog microphones have typically been a better choice for ultra-low-power applications. Analog mics have an internal amplifier and thus need some power, but with PDM or I2S digital output have more internal components and thus draw more power. However, analog microphones may require adding an analog-to-digital converter stage, if this function is not already built into the SoC.

One example of a MEMS mic designed for ultra-low-power applications is the Vesper VM1010, an analog-output microphone rated to draw only 8 µA of power when in “Wake on Sound” mode. Considering that batteries in portable products typically dissipate about 50 µA of power even when fully powered off, the VM1010 has essentially zero effect on the battery life of a portable product.

A piezoelectric microphone element in the VM1010 is monitored by a very low-power comparator circuit, which sends a wake signal to the rest of the system when the sound at the mic exceeds a certain threshold, which is set by an external resistor. Proper choice of resistor sets the required threshold to optimize VM1010 for best performance in a variety of noise environments. The VM1010 focuses on sounds between 250 Hz and 6 kHz, for better pickup of human voices and rejection of environmental noises such as machinery rumbles and wind noise. The Zero Power listening in VM1010, therefore offers an ultra-low power mode before the lowest power voice activity detect mode in a system, thereby offering considerable power savings in standby. A single microphone of this sort can be used to trigger the microphone array, audio processing circuitry and Internet connection (if applicable) of a voice command product.

Voice-recognition microphones in portable products must also be rugged, able to withstand the shock of the product being dropped from waist-high onto concrete. They may also need to be waterproof or at least water-resistant. The VM1010 cited above is immersible, dustproof and shockproof, so it meets all of these criteria.

Another possible way to save power is by using an accelerometer to wake the device, so an abrupt movement can activate the microphone array and processing circuitry. This design can eliminate the need to have a microphone always “listening.” It is probably not practical in products such as remotes and control panels, which may lie beyond arm’s reach, but it may be practical in some wearables.

In any voice-command product, the audio processor—whether a dedicated DSP or a processing core within an SoC—must have the necessary computational capability to process the signals from all of the microphones in an array, and to run all the algorithms necessary for voice recognition. The more advanced algorithms and the more microphones the chip can accommodate, the better the signal-to-noise ratio and more accurate the voice recognition will be. In portable and battery-powered products, however, the processor must also consume as little power as possible in order to maintain adequate battery life in the product. This delicate balancing act of computational and power efficiency is an extremely difficult engineering challenge.

One processor line designed specifically to handle substantial audio processing tasks in products with small form factors and battery power is Ambiq Micro’s Apollo line. These microcontrollers and SoCs are designed using Ambiq Micro’s SPOT (Subthreshold Power Optimized Technology) platform, which allows them to run on less than 1/10th the current of a typical audio processor. The company’s first SPOT-based MCU, the Apollo1, is a 24 MHz Cortex M4F-based MCU focused on sensor processing.  It consumes 35uA/MHz with the processor at full load and as little as 143 nA in sleep mode, only about 0.003x the typical quiescent power dissipation of the batteries used in portable products.

The next generation Cortex M4-based Apollo2 adds PDM inputs along with a doubling of the memory footprint and processing capability to 48 MHz to focus on ultra-low power, always-on voice command processing. The Apollo2 Blue further builds on the Apollo2’s capabilities with an integrated Bluetooth low-energy controller and Bluetooth 5-ready radio. 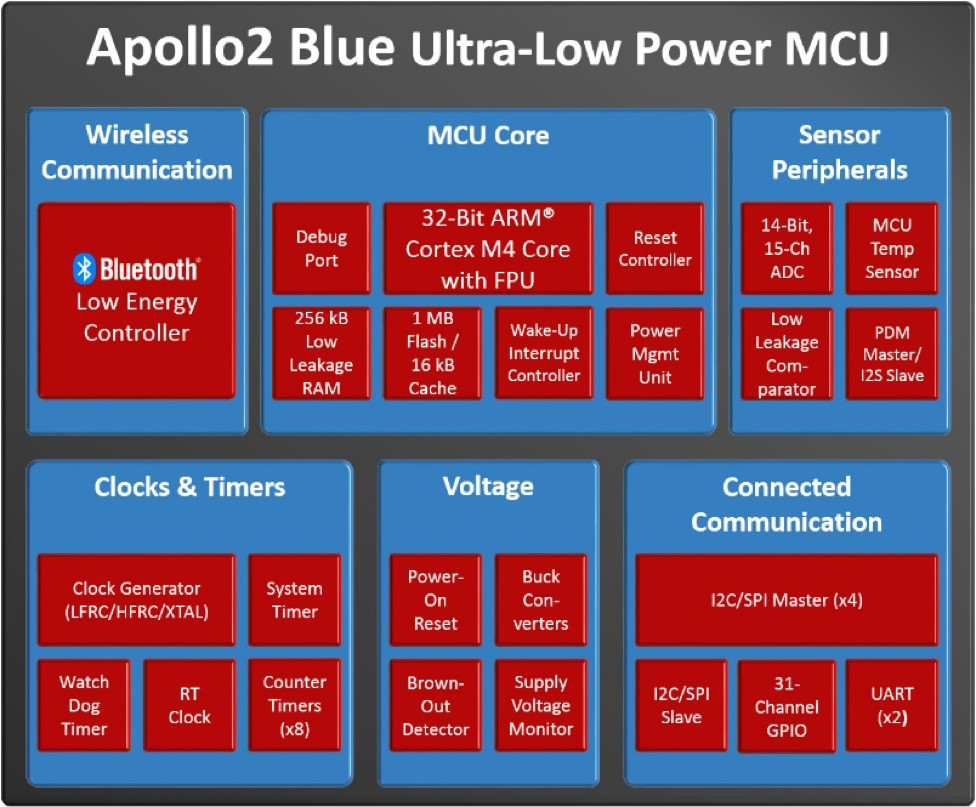 All of these processors have the compact size needed for tiny wearable products such as earphones; they measure from 2.5mm to 4.5mm square, depending on the pin configuration. The Apollo1’s active power consumption is rated at 35 µA/MHz, while the Apollo2 and Apollo2 Blue are rated at less than 10 µA/MHz. With the Apollo2 Blue’s Bluetooth 5 radio, it can act as a dedicated Voice-over-Bluetooth Low Energy channel for voice assistants.

Beyond the microphone array and audio processor, a voice command product will require additional components. Specific component requirements will depend on the application and form factor, but there are a few that almost every voice command product will employ. As with the microphones and processors, these components must be chosen not only for their functions and performance, but also for small size and low power consumption.

Wireless interface: In order to offer more than the most basic capabilities, voice command products need to access the Internet, so they can send and receive data from external servers. With smart speakers designed for home use, this connection is made through WiFi to a LAN. With portable voice-command products, it is typically made through Bluetooth to a smartphone or tablet, which is in turn connected to the Internet through a cellular data network or through WiFi.

User feedback components: Most voice command products incorporate some kind of user feedback, to confirm that the device is active, that it heard and understood the user’s command correctly, and that it will carry out the desired action. These devices can be LEDs, such as the flashing lights atop the Amazon Echo and Google Home smart speakers. They can also be alphanumeric or graphical displays, which may be found on many remotes and home automation wall panels.

Most of these devices will likely have audio feedback as well, which may confirm the user’s command through alert tones or through voice synthesis—yet another load placed on the processor. The unit must employ an amplifier and a speaker of some sort to reproduce the voice and/or alert tones. Some products may use multiple drivers with a beamforming algorithm to direct the response back at the listener.

The physical design of a product can have a large impact on the performance of its voice recognition systems. As noted in the DSP Concepts white paper cited above, precise matching of microphone sensitivity is essential to reliable beamformer performance and accurate voice recognition.

Besides taking care to design voice command products so every microphone in their arrays is in a similar acoustical environment, manufacturers can assure best possible performance of voice command products by level-matching the microphones of each unit individually at the factory. This extra QC step assures that differences in microphone performance due to minor manufacturing inconsistencies do not affect the accuracy of voice recognition.

Paul Beckmann, PhD, is Founder/CTO of DSP Concepts. Dr. Paul Beckmann has extensive experience developing audio products and implementing numerically intensive algorithms. Paul spent 9 years at Bose Corporation where he developed the first Lifestyle digital home theater product and was awarded the “Best of What’s New” award from Popular Science for contributions made to the Videostage decoding algorithm. Paul was tasked by Dr. Bose to charter Bose Institute with industry courses on digital signal processing, and holds a variety of patents in signal processing techniques. He received BS and MS degrees in Electrical Engineering from MIT in 1989 and a PhD in Electrical Engineering, also from MIT, in 1992. He was a Rockwell Fellow while in graduate school.

Aaron Grassian is Vice President of Marketing at Ambiq Micro. Aaron is an international business development executive with experience in building, organizing, and managing global teams and channel partners for both public and private technology companies.  He has repeated success in driving ultra-low power solutions through multiple channels, targeting and winning initial designs, and quickly growing revenue through customer engagements and partnerships.  His career, which started in product marketing at Motorola, includes 15 years of experience in building and managing Asia sales for startup companies including SigmaTel, Luminary Micro (acquired by Texas Instruments), and Calxeda.   He has global customer experience including managing worldwide distribution for SigmaTel while being stationed in Hong Kong.  Aaron holds a BSEE from the University of Florida.

Matt Crowley is CEO at Vesper. Matt’s passion for building great teams to bring disruptive technologies to market is fully evident at Vesper – which introduced its first product to market nearly five times faster than the industry average. Prior to joining Vesper, Matt was founder and vice president of business development at Sand 9. At Sand 9, Matt pioneered the mass commercialization of piezoelectric MEMS devices and led partnerships with industry leaders such as Intel, Ericsson, Analog Devices and CSR. Analog Devices acquired Sand 9 in 2015. Sand 9 was spun out of Boston University Office of Technology Development, where Matt was responsible for evaluating new inventions, forming new companies to commercialize those technologies and managing a venture capital program. Before joining BU, Matt worked at Mars & Co strategy consulting, where he advised Fortune 500 companies on operational and strategic issues. Matt received an interdisciplinary degree in Physics and the Philosophy of Science from Princeton University. He is fluent in Japanese and has lived in Japan.

Focusing on technology as DSP Concepts continues to grow. We specialize in audio processing solutions for streamlining audio product development with our Audio Weaver tools and solutions.