Almost 40 years after helping cofound National Instruments, James “Dr. T.” Truchard still finds time to meet with the press to talk about his reflections on the past, insights into the present, and vision of the future of the test and measurement sector. Melding a bit of all three in response to a question about the company’s use and dissemination of ‘Big Analog Data, Dr. T. stated that “National Instruments has always viewed data as the most important thing, even without knowing so. Data is the currency that IoT runs on, and our goal is to make analog data center stage.”

Of course, from an NI standpoint, this position makes perfect sense. Currently, one of the most significant roadblocks for IoT developers is the inability to produce meaningful digital apps from the cacophony of analog inputs in an average environment, requiring system nodes that reside above the sensor level on the IoT value chain that are capable of initially analyzing and filtering data in motion. Here, Dr. T. and NI are seeing platforms like the CompactRIO (rooted in the CompactPCI standard) being put to use thanks to specialized synchronization and real-time measurement at the point of data capture made possible by FPGAs – FPGAs that can be abstractly programmed using the company’s LabVIEW software, and offering just keeps advancing after nearly three decades in the field.

Dr. T took the opportunity to point out that LabVIEW versioning is intentionally staggered to help ease migration headaches – not insignificant over the course of 30 years – and that even after all this time, the improvements being made in NI’s flagship software offering continue to shrink the man years for complex embedded system design and test from decades to months. One such innovation is the the new multirate diagram in the LabVIEW Communications System Design Suite (pictured below), which enables code optimization on deployed targets and provides a single, high-level representation of mathematical algorithms. This is in addition to other upgrades in LabVIEW 2015 that allow developers to open, write, debug, and deploy code faster. A full list of the features and changes in LabVIEW 2015 can be viewed here. 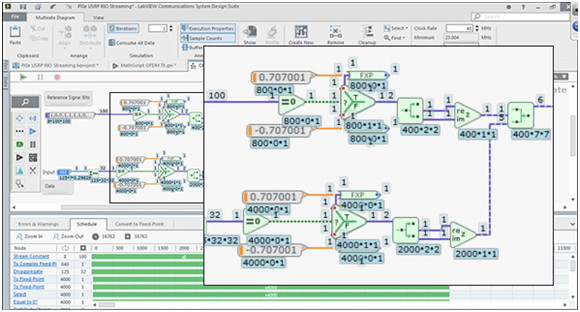 The multirate diagram included in the LabVIEW Communications Design Suite is one of the code optimization features available in versions of LabVIEW 2015.

Not a bad life’s work, Dr. T. And thanks again for the prime rib.