[Photo Credit: By Zeptomoon - Own work, CC BY-SA 4.0, Wikimedia Commons] If you enjoy automating physical things with development platforms such as th...

If you enjoy automating physical things with development platforms such as the Arduino, then the ESP8266 is certainly worth a look. For around $2, this tiny module can communicate with a network via Wi-Fi and pass signals back and forth from a microcontroller. If that wasn’t enough, it also contains an 80 MHz processor that can be overclocked to 160 MHz and features general-purpose input/output (GPIO) pins, allowing it to interact with the world via LED lights, relays, or other MakerPro goodies on its own.

Considering that a 160 MHz Pentium computer in the early 1990s cost well over $1000, $2 seems like an unbelievable price for a module with a processor capable of 160 MHz. Granted, more certainly goes into a desktop computer than this little module, but on the other hand, a ‘90s computer almost certainly didn’t feature wireless communication.

This massive leap in technology can perhaps be best illustrated by the Charles Lohr’s ColorChord algorithm. As seen on IEEE Spectrum, he originally wrote this program to run on a Pentium-based PC. It assigned colors to notes and these color values then controlled LED lights. When it was written, the computer actually had a hard time running it. Several years later, a friend of his optimized the code and, after more fiddling, he was able to get it to run on the tiny ESP8266 module using a string of programmable LEDs. This assembly was then attached to a saxophone, a device that could either be an impressive performance piece or something to help students hit the correct pitch.

On the other hand, if you need something to monitor temperature, or perhaps whether or not you’ve received mail, don’t think that this module is above such menial tasks. Sure, it could do those tasks with half its processing power “tied behind its back” (or much, much more in reality), but at $2, you won’t hurt anyone’s feelings. 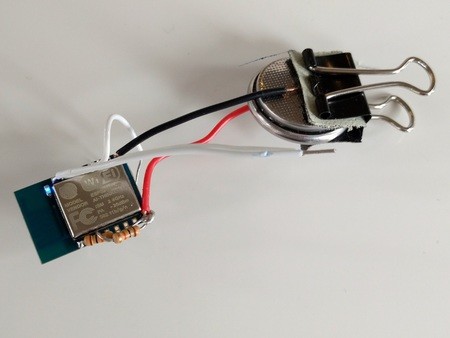 [A clever battery attachment method, but perhaps not the easiest way to use the ESP8266. Photo Credit: By Autopilot - Own work, CC BY-SA 4.0, Wikimedia Commons]

On the other hand, it can be difficult to get all the available functionality out of this module if you’re not comfortable doing some fairly difficult soldering. Though you’ll still have to solder pin headers on, the HUZZAH ESP8266 breakout board from Adafruit looks much more approachable. It includes a reset button, an output LED, and 9 GPIO pins that are nicely broken out. Even with all of that included, it’s barely larger than a quarter. 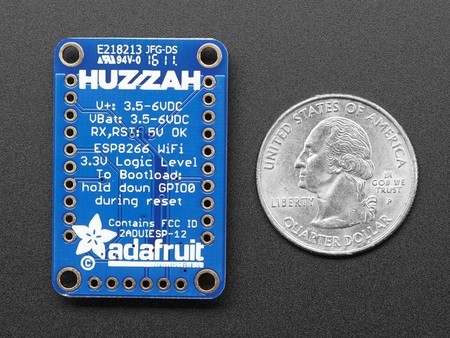 [Still not much bigger than a quarter! Photo Credit: Adafruit Industries]

If this incredible little module has piqued your interest, the cost to start experimenting is quite low. If you have questions, or need inspiration, the ESP8266 Community Forum is a great place to poke around. You can find documentation, videos, and discussion about different platforms that the module can be used with. There is even an annual design contest with cash prizes – great motivation to come up with something really cool by the next time it runs!