Welcome to a Brave New World of AIOMs

Computing technology is constantly advancing, which places pressure on equipment manufacturers to stay competitive. One solution is for manufacturers to adopt a Computer-on-Module (COM) based strategy, thereby allowing them to satisfy a wide range of product requirements in a way that reduces development time, effort, and resources, speeds time-to-market, minimizes risk, and helps future-proof their systems.

The terms "Computer-on-Module" and "COM" were coined by market researcher Venture Development Corp (VDC) in 2001. COMs are complete embedded computers implemented on a relatively small printed circuit boards (PCBs). These designs are centered on a processor (possibly containing multiple cores), memory, input/output (I/O) controllers, and any other features required to implement a fully functional computer.

Unlike traditional single board computers (SBCs), however, COMs lack the standard connectors that would allow input/output peripherals to be connected directly to the board. Instead, the COM is plugged into a carrier board (or “baseboard”), which contains any additional components and subsystems. This allows the COM to focus on providing the core compute capabilities, while the carrier boards provide the “secret sauce” that allows system designers to differentiate their products from competitor offerings.

In order to take full advantage of the benefits offered by a COM-based approach, it is necessary to use industry-standard COM offerings. One of the most popular COM standards is SMARC (Smart Mobility ARChitecture), whose specification published by the Standardization Group for Embedded Technologies e.V. (SGET). SMARC COM modules are specifically designed for the development of extremely compact low-power systems based on ARM and x86 SoCs. 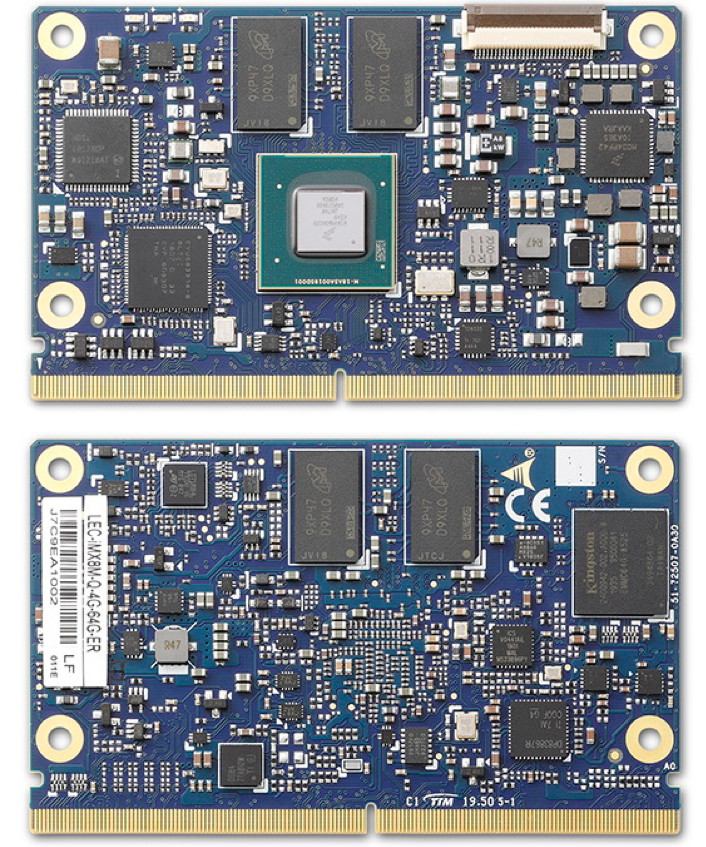 Front (top) and back (bottom) views of a previous generation SMARC module based on the NXP iMX8M (Image source: ADLINK)

SMARC’s modular approach, specifically the ability to replace one SMARC COM with another while keeping the same carrier board, allows scalability, fast time-to-market, and upgradability while maintaining low costs, low power, and small physical size.

The SGET membership includes many of the world’s leading creators of products for embedded computing, test and measurement, and automation applications. In addition to being a key SGET member, ADLINK is one of the driving forces behind the SMARC specification and offers a wide variety of state-of-the-art SMARC COM modules.

The market for products equipped with artificial intelligence (AI) is growing exponentially. Examples of AI-enabled systems include smart cameras and predictive maintenance systems. In the case of surveillance and monitoring applications, smart cameras can be used to detect and recognize people and objects in factories, cities, and homes. In the case of predictive maintenance applications, systems equipped with AI can monitor things like sounds and vibrations to determine the health of machines. When these AI systems detect anomalies and observe undesirable trends, they can alert their human colleagues as to impending problems, thereby allowing maintenance teams to address these issues without disrupting the operations of the factory or facility.

Unfortunately, if designers are using traditional SMARC modules, they also need to design the carrier board to accommodate an add-on card carrying the NPU. In addition to increasing the size, cost, and power of the resulting system, this approach negatively impacts development time, effort, and resources, reduces time-to-market, and increases risk.

The solution is to use a SMARC AIOM module, which is a SMARC COM that carries both MPU and NPU devices. Once again, ADLINK is one of the driving forces behind the SMARC AIOM specification.

From Proof-of-Concept to Production SMARC AIOMs

ADLINK defined the AIOM (AI-on-Module) concept in 2018. In March 2020, SGET released the 2.1 version of the specifications, which includes a 4-camera interface and gives AIOM the attention it deserves.

As a proof-of-concept, ADLINK created the first SMARC AIOM, the LEC-AL-AI, using an Intel Apollo Lake CPU and an Intel Movidius NPU.

The response to the LEC-AL-AI has been huge, but having the CPU and NPU in separate packages does not provide the optimal solution for the longer term. Thus, ADLINK currently has two more SMARC AIOMs in development -- the LEC-KMB and the LEC-IMX8M-PLUS. 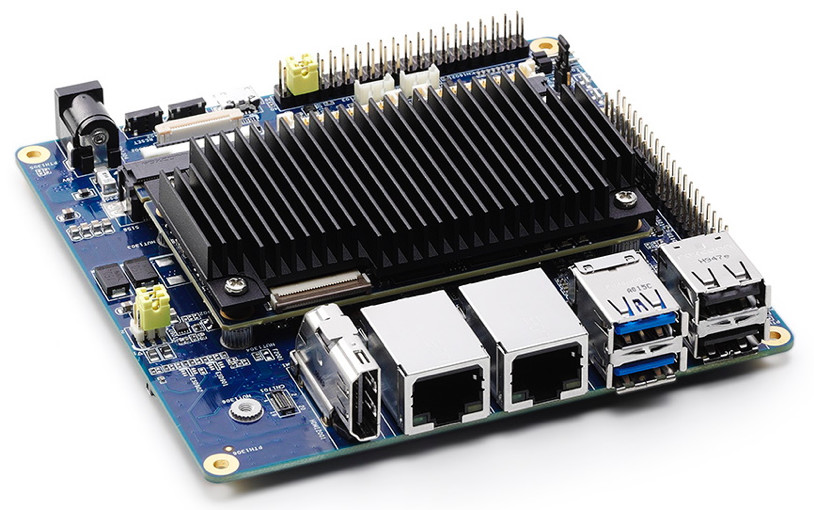 Both of these SMARC AIOMs have their CPU and NPU dice -- along with other dice and components -- mounted on a single silicon substrate and presented in the same System-in-Package, thereby offering the highest levels of performance combined with the lowest power consumption.

The LEC-IMX8M-PLUS is based on an NXP i.MX 8M Plus, while the LEC-KMB will feature a forthcoming Intel device we will call the “Intel-K.” Both of these devices combine powerful dual or quad 64-bit Arm Cortex-A53 CPUs with an integrated NPU. 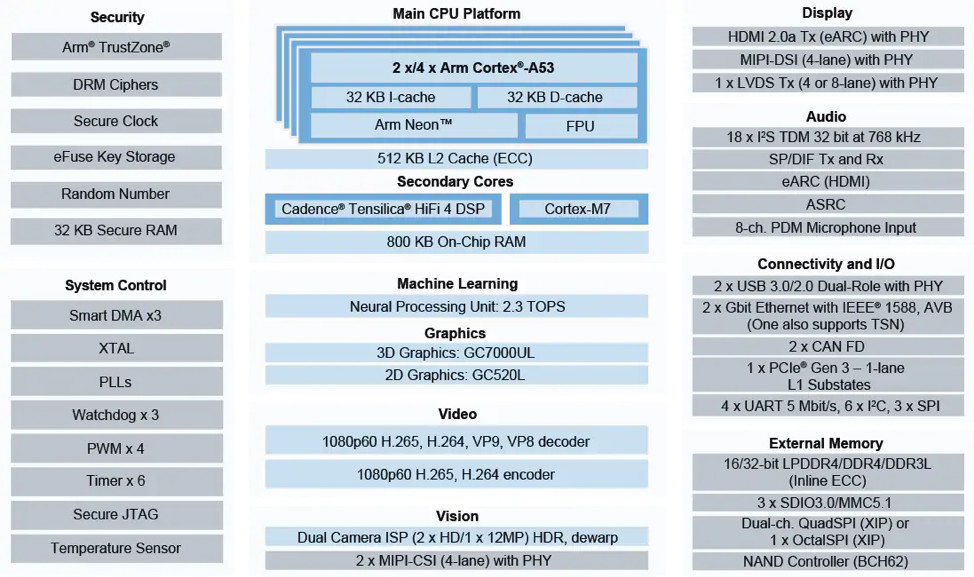 ADLINK is a launch partner with NXP for the LEC-IMX8M-PLUS with and Intel for the LEC-KMB, which means ADLINK will be the first to release products to the market using these next-generation devices.

The Future is Closer than You Think

According to the market research firm Omdia | Tractica, the global AI software market is forecast to experience massive growth in the coming years, with revenues predicted to increase from around $10 billion U.S. dollars in 2018 to $126 billion in 2025.

The growth of the AI software market (Image source: ADLINK)

The AI market includes a wide array of applications, all of which will benefit from access to NPUs. These applications include object detection and recognition, expression analysis, audio event detection and scene classification, surveillance and monitoring, autonomous vehicles, predictive maintenance, and … the list goes on.

In the next few years, AI will be deployed in a vast array of applications -- all designed to make our lives better -- and ADLINK will continue to be at the forefront of this exciting technology. AI is the Future, SMARC AIOMs are the future of AI, and ADLINK’s AIOMs will allow developers of AI-enabled embedded systems to design and deploy future-proof cost-effective products quickly and efficiently.