SSFM improves EMI by not allowing emitted energy to stay in any one receiver band for a significant length of time.

Electromagnetic radiation (EMR), electromagnetic interference (EMI), and electromagnetic compliance (EMC) are terms that pertain to energy from electrically charged particles and the associated magnetic fields that can potentially interfere with circuit performance and signal transmissions. With the proliferation of wireless communications, the plethora of communication devices, and the growing number of communication methods (including cellular, Wi-Fi, satellite, GPS, etc.) using more and more of the frequency spectrum (with some bands overlapping), electromagnetic interference is a fact of life. To mitigate the effects, many governmental agencies and regulatory organizations have set limits on the amount of radiation that can be emitted by communications devices, equipment, and instruments. One example of such a specification, CISPR 16-1-3, deals with radio disturbance and immunity measuring apparatuses and measuring methods.

Electromagnetic interference can be characterized as conducted (transmitted via the power supplies) or radiated (transmitted through the air). Switching power supplies generate both types. One technique Analog Devices has implemented to reduce conducted and radiated interference is spread spectrum frequency modulation (SSFM). This technique is used in several of our inductor- and capacitor-based switching power supplies, silicon oscillators, and LED drivers to spread the noise over a wider band, thereby reducing the peak and average noise at a particular frequency.

SSFM improves EMI by not allowing emitted energy to stay in any one receiver band for a significant length of time. The key determinants for effective SSFM are the amount of frequency spreading and the modulation rate. For switcher applications, spreading of ±10% is typical and the optimal modulation rate is dictated by the modulation profile. Various methods of frequency spreading are used for SSFM, such as modulating the clock frequency with a sine wave or a triangular wave. 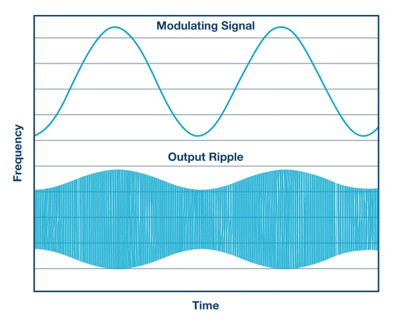 (Figure 1. Illustration of switching regulator ripple due to sinusoidal frequency modulation of the clock.)

Since the modulating frequency is much lower than the switcher’s clock, it may be difficult to filter out. This could lead to problems, such as audible tones or visible display artifacts, due to supply noise coupling or limited power supply rejection in the downstream circuitry. A pseudo-random frequency modulation can avoid this periodic ripple. With pseudo-random frequency modulation, the clock shifts from one frequency to another in a pseudo-random fashion. Since the switcher’s output ripple is amplitude modulated by a noise-like signal, the output looks as if there is no modulation and the downstream system implications are negligible.

As the range of SSFM frequencies increases, the percentage of in-band time is reduced. In Figure 2 below, note how the modulated frequency appears as a wideband signal with a 20 dB lower peak value when compared to the single unmodulated narrowband signal. If the emitting signal enters the receiver’s band infrequently and for short periods (relative to its response time), significant EMI reduction occurs. For example, frequency modulation of ±10% will be much more effective at EMI reduction than frequency modulation of ±2%.1 However, switching regulators have a limited range of frequencies that they can tolerate. As a general rule, most switching regulators can easily tolerate frequency variation of ±10%. 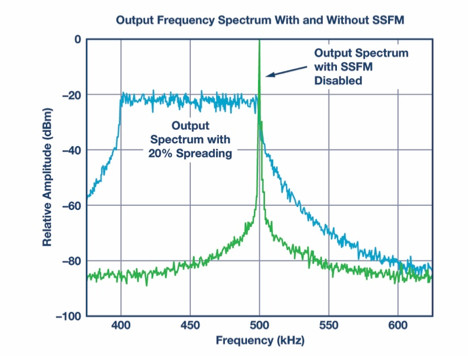 The typical methods for measuring EMI are referred to as peak detection, quasi-peak detection, or average detection. For these tests, the bandwidth of the test equipment is appropriately set to reflect the real world bandwidth of interest and determines the effectiveness of SSFM. When frequency modulated, the detector responds as the emissions sweep through the detector’s band. When the bandwidth of the detector is small compared to the modulation rate, the detector’s finite response time results in an attenuated EMI measurement. In contrast, the detector’s response time does not affect a fixed frequency emission and no EMI attenuation is observed. The peak detection test shows an improvement with SSFM that directly corresponds to the amount of attenuation. The quasi-peak detection test can show even further EMI improvement since it includes the impact of the duty cycle. Specifically, a fixed frequency emission produces a duty cycle of 100%, while the duty cycle from SSFM is reduced according to the amount of time that the emissions are within the detector’s band. Finally, the average detection test can show the most dramatic EMI improvement since it filters the peak detected signal with a low pass, resulting in the average in-band energy. Unlike fixed frequency emissions, where average and peak energy is equal, SSFM attenuates both the peak detected energy and the amount of in-band time, resulting in a lower average detection result. Many regulatory tests require that systems pass both quasi-peak and average detection tests.

At any instant in time, peak emissions from a switching regulator may appear to be the same, whether or not SSFM is enabled. How is the possible? The effectiveness of SSFM is in part dependent upon the bandwidth of the receiver. To receive an instantaneous snapshot of emissions requires an infinite bandwidth. Every practical system has a limited bandwidth. If the clock frequency changes faster than the bandwidth of the receiver, the reduction in received interference will be significant. 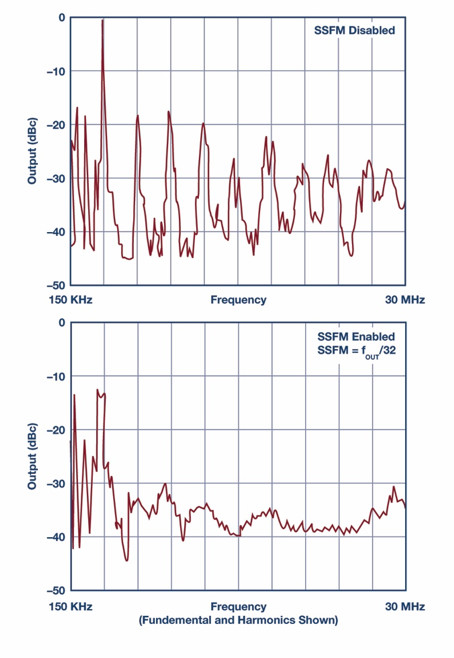 There is a limit, however, to the rate of frequency hopping. If the frequency hops at a rate beyond the switching regulator’s bandwidth, output spikes may occur at the clock frequency transition edge. Lower switcher bandwidths result in more pronounced spikes. For this reason, the LTC6908 and LTC6909 include a proprietary tracking filter that smooths the transition from one frequency to the next (the LTC6902 uses an internal 25 kHz low-pass filter). The internal filter tracks the hop rate to provide optimal smoothing for all frequencies and modulation rates.

This filtered modulating signal may be acceptable for many logic systems, but the cycle-to-cycle jitter issues must be considered carefully. Even with the tracking filter, the bandwidth of a given regulator may still be insufficient for high rates of frequency modulation. For bandwidth limitations, the LTC6908/LTC6909 frequency hop rate can be reduced from a default rate that is 1/16th of the nominal frequency, to a rate of 1/32nd or 1/64th of the nominal frequency.

To reduce switching noise, the LTM4608A can operate with spread spectrum enabled by tying the CLKIN pin to SVIN (low power circuitry supply voltage pin). In spread spectrum mode, the LTM4608A’s internal oscillator is designed to produce a clock pulse whose period is random on a cycle-by-cycle basis but fixed between 70% and 130% of the nominal frequency. This has the benefit of spreading the switching noise over a range of frequencies, thus significantly reducing the peak noise. Spread spectrum operation is disabled if CLKIN is tied to ground or if it’s driven by an external frequency synchronization signal. Figure 5 shows the operating circuit with spread spectrum operation enabled. A capacitor value of 0.01 µF must be placed from the PLL LPF pin to ground to control the slew rate of the spread spectrum frequency change. Component values are determined from the equation:

The LT8609 is a micropower, step-down converter that maintains high efficiency at high switching frequencies (93% at 2 MHz), allowing smaller external components. SSFM mode operates similar to pulse skipping mode operation, with the key difference that the switching frequency is modulated up and down by a 3 kHz triangle wave. The modulation range is set at the low end by the switching frequency (which in turn is set by the resistor on the RT pin), and at the high by a value of approximately 20% higher than the frequency set by RT. To enable spread spectrum mode, tie the SYNC pin to INTVCC or drive it to a voltage between 3.2 V and 5 V.

The LTC3251/LTC3252 are 2.7 V to 5.5 V, single 500 mA/dual 250 mA charge pump-based step-down regulators that produce a clock pulse whose period is random on a cycle-by-cycle basis, but fixed between 1 MHz and 1.6 MHz. Figures 6 and 7 show how the spread spectrum feature of the LTC3251 significantly reduces the peak harmonic noise and virtually eliminates harmonics compared to a conventional buck converter. Spread spectrum operation is selectable with the LTC3251, but is always enabled with the LTC3252. 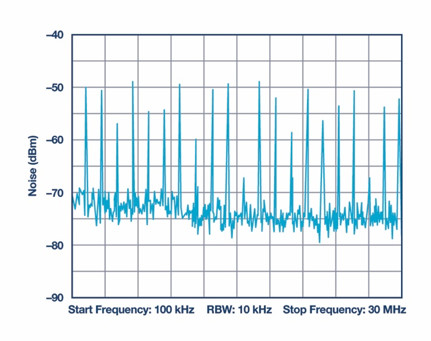 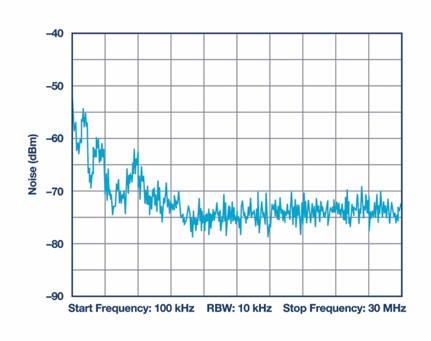 Switching regulator LED drivers can also be troublesome for automobiles and display lighting applications concerned with EMI. To improve EMI performance, the LT3795 110 V multitopology LED driver controller includes SSFM. If there is a capacitor at the RAMP pin, a triangle wave sweeping between 1 V and 2 V is generated. This signal is then fed into the internal oscillator to modulate the switching frequency between 70% of the base frequency and the base frequency, which is set by the clock frequency setting resistor, RT. The modulation frequency is set by the equation:

Figure 8 and Figure 9 show the noise spectrum comparison between the conventional boost switching converter circuit (RAMP pin tied to GND) and a spread spectrum modulation enabled boost switching converter (6.8 nF at the RAMP pin). Figure 8 shows the average conducted EMI and Figure 9 shows peak conducted EMI. The results of EMI measurements are sensitive to the RAMP frequency selected with the capacitor. 1 kHz is a good starting point to optimize peak measurements, but some fine tuning of this value may be necessary to get the best overall EMI results in a particular system. 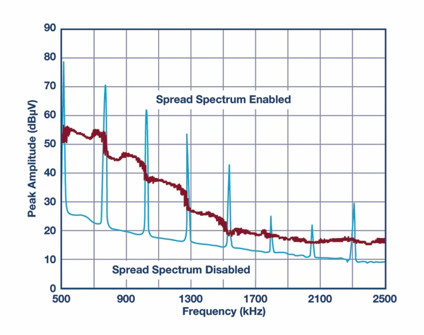 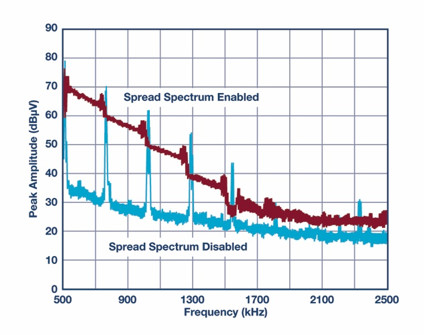 The LT3952 is a 60 V/4 A power switch, constant current, constant voltage multitopology LED driver that features optional SSFM. The oscillator frequency is varied in a pseudo-random manner from the nominal frequency (fSW) to 31% above nominal in 1% steps. This unidirectional adjustment allows the LT3952 to avoid a sensitive frequency band (such as the AM radio spectrum) in the system simply by programming the nominal frequency slightly above it. The proportional step size allows the user to easily determine the clock frequency value (RT pin) for this specified EMI test bin size, and the pseudo-random method provides tone suppression from the frequency variation itself.

The pseudo-random value is updated proportionally to the oscillator frequency, using a rate of fSW/32. This rate allows multiple passes of the entire group of frequencies during standard EMI test dwell times. 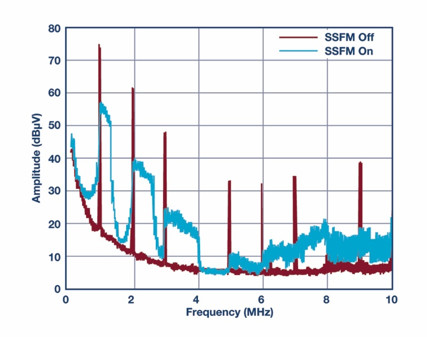 Analog Devices has many other products that effectively use design techniques to reduce EMI. As mentioned, using SSFM is one technique. Other methods include slowing down fast internal clock edges and internal filtering. Another novel technique is accomplished with our Silent Switcher® technology, which uses the layout to effectively reduce EMI. The LT8640 is a unique 42 V input, micropower, synchronous step-down switching regulator that combines Silent Switcher techniques and SSFM to reduce EMI. So, the next time EMI is an issue in your design, be sure to look for our low EMI products that make it easier for you to be compliant to EMI standards.

±2% SSFM is common for microprocessors and data clocks because they cannot tolerate large frequency variation.

The repetition rate of the full pseudo-random sequence is guaranteed to be less than 20 Hz.

Kevin Scott works as a product marketing manager for the Power Products Group at Analog Devices, where he manages boost, buck-boost, and isolated converters, as well as LED drivers and linear regulators. He previously worked as a senior strategic marketing engineer, creating technical training content, training sales engineers, and writing numerous website articles about the technical advantages of the company’s broad product offering. He has been in the semiconductor industry for 26 years in applications, business management, and marketing roles.

Kevin graduated from Stanford University in 1987 with a B.S. in electrical engineering and started his engineering career after a brief stint in the NFL. He can be reached at [email protected].