The Mobile Industry Processor Interface (MIPI) specifications for cameras and sensors have served billions of smartphones, and now they are eying the second largest market for electronic components.

The Mobile Industry Processor Interface (MIPI) specifications for cameras and sensors have served billions of smartphones, and now they are eying the second largest market for electronic components: 90 million cars produced every year. The robust EMI performance protection and low power consumption ensured by the interface specifications ideally fit into automotive design requirements.

Figure 1. The MIPI part is shown on the bottom right (light green) in the block diagram of the EyeQ4 automotive chip. Image: Mobileye

However, the emergence of advanced driver assistance systems (ADAS) and autonomous cars have led to increasing volumes of data from various automotive cameras and sensors. That, in turn, is driving the adoption of 64-bit processors for managing this vast amount of data in near-real-time settings.

And this led to MIPI Alliance's first foray into the automobile world — Automotive Birds of a Feather (BoF) Group — that began reviewing MIPI specifications with the intention of enhancing them for automotive designs with higher bandwidths and communication link lengths of longer than 3 meters.

The next logical step was MIPI Alliance's quest to standardize interfaces between automotive subsystems such as ECUs and surround sensors, and it was manifested in the formation of Automotive Working Group (AWG). It brought in automotive OEMs and tier-1 and tier-2 suppliers; AWG was tasked to align interfaces for cameras, lidars, radars, displays and more while consolidating the interface technology for the automotive ecosystem.

The formation of the MIPI AWG eventually culminated into the development of the MIPI A-PHY specification for optimizing wiring, cost and weight requirements. The physical layer specification — supporting distances of up to 15 meters — will facilitate high-speed data, control data and optional power share on the same physical wiring. It is currently developing interfaces for 12 Gbps to 24 Gbps speeds, and it's aiming at 48 Gbps bandwidth for displays and other automotive use cases. 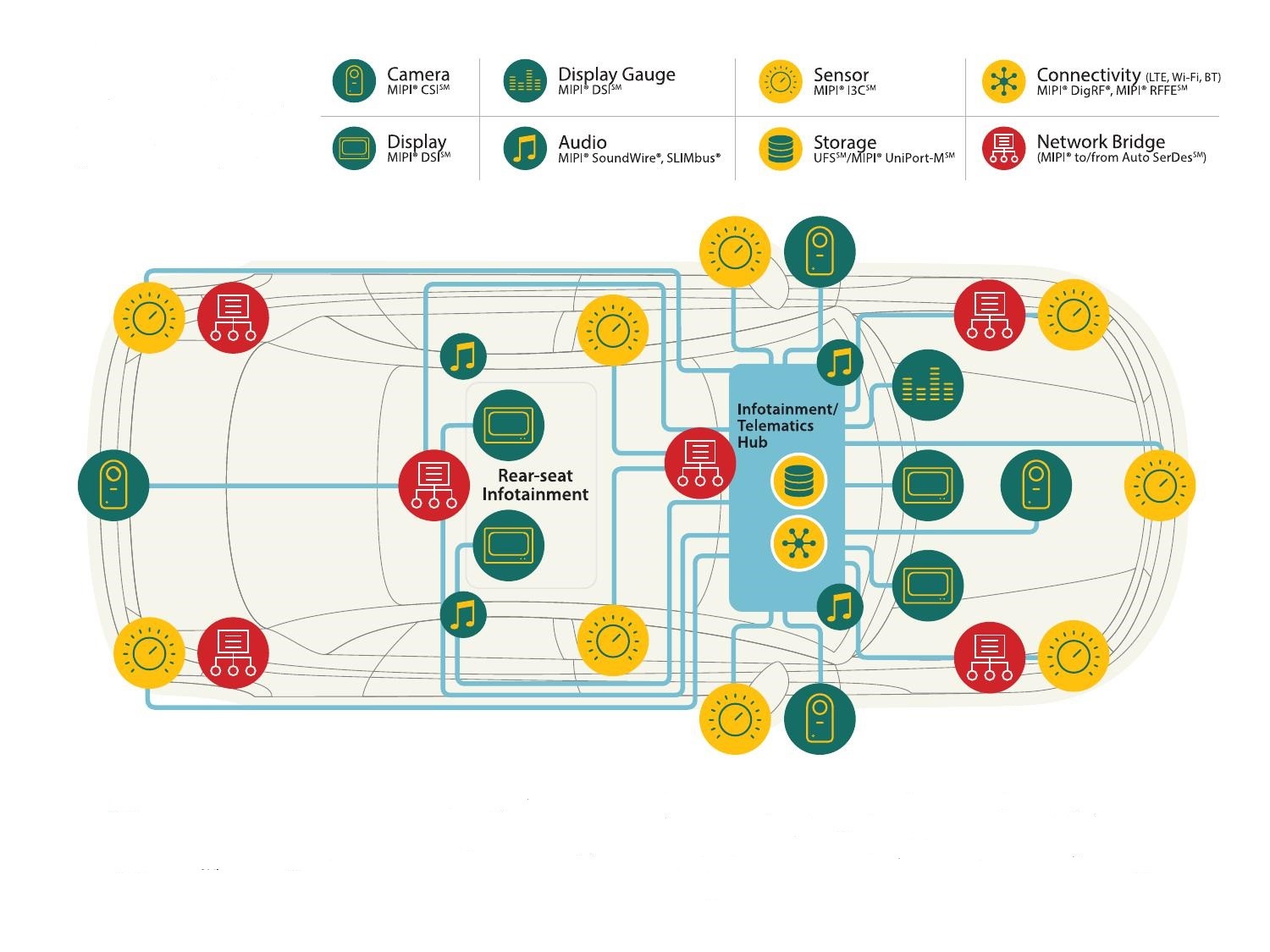 The MIPI A-PHY links come in point-to-point topology and they are asymmetric in nature. The first version of this interface specification — MIPI A-PHY v1.0 — will be available to developers in late 2019. However, the MIPI A-PHY components are expected to be in production vehicles not before 2024.