In the embedded computing space, very few technologies last forever. And those that do tend to get upgrades over the years; sometimes they are significant upgrades. The COM-HPC specification, developed by PICMG, is a good example of that, sort of.

The organization, whose charter is to develop open modular computing standards, has a widely used specification in COM Express. The number of vendors designing and selling products that conform to COM Express is more than a 100 and continues to grow. And the technology, introduced around 2005, still has lots of life remaining, especially in the industrial sector.

But when you move into applications that really push the performance envelope, like medical imaging and gaming, and those that take advantage of AI or machine vision, it starts to run out of steam, particularly if you want to operate those applications at the Edge of the IoT. And if secure is a top priority, keeping your data at the Edge, rather than transmitting it to the Cloud, is always a good idea.

Enter COM-HPC. Almost two years in the making, this leading-edge specification has many advantages over COM Express, including higher bandwidth (more than 2X), more connector pins, and some other key features (see the figure). The larger area on the COM-HPC modules allow for the use of full-size DIMMs; up to eight full-size DIMMs can provide up to 1 Tbyte of DRAM. That puts the COM-HPC module squarely in line for server applications, as they have the ability to act as either a server or a client. 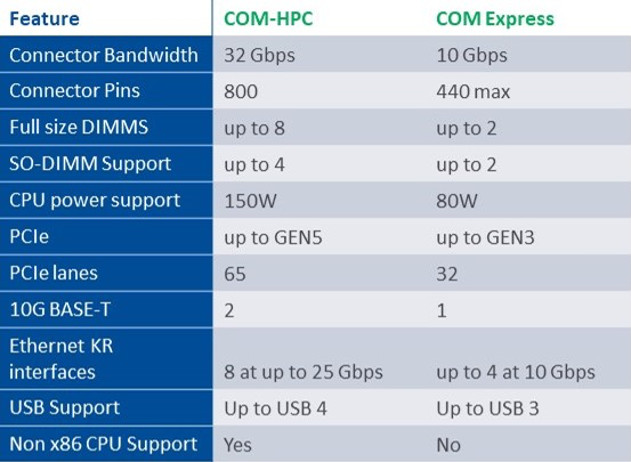 The COM-HPC module shows an obvious upgrade path from the existing (and popular) COM Express module.

“The beauty of an open standard like COM-HPC is that it’s interchangeable between different vendors and also between different technologies,” says Christian Eder, the Director of Marketing for Congatec. “Because the core functionality is already designed and tested for you, you have a significantly reduced development time and cost for embedded computing applications.”

From the OEMs’ perspective, it allows them to offer a scalable product range, with varying performance and/or power levels. And of course, this lets the customer focus on what they do best, which is the end application. Another key is that it does not lock the OEM into one module vendor. The open standard ensures that lots of vendors will have offerings.

With a final release of the COM-HPC spec planned for January 2021, the technical committee has had input from 26 member companies. Three groups were formed: a main group, a management interface sub-group, and a signal integrity sub-group. This latter group faced some significant design challenges, requiring lots of simulations, all of which had to be documented. Some rough calculations say that the three groups collectively invested about 3000 man-hours in spec development, including the writing and editing of a 182-page (and counting) design guide.

A system management software interface is included in the specification. It’s defined for out of band management for general remote manageability, which is a typical server application. Hence, designers can create processor or non-processor modules, like accelerator cards, graphics/video cards, and so on. Thanks to the specifying of larger modules for server applications, the number of PCI Express lanes can be increased to 65, and up to eight 25-Gabit Ethernet interfaces can be accommodated.

A preview of the COM-HPC specification is now available on the PICMG web site. In addition, a video featuring congatec’s Christian Elder does a nice job of explaining why there’s a need for such a spec. He emphasized that COM Express will continue to be successful for a host of reasons, and COM-HPC will discover new, previously unattainable markets.