The new generation of factory machinery across every manufacturing industry has an unprecedented level of integrated intelligence. Historically, this...

The new generation of factory machinery across every manufacturing industry has an unprecedented level of integrated intelligence. Historically, this intelligence was used just for local machine control, and later, for very basic local monitoring, often as simple as the Boolean on/off state.

Today, these machines invariably connect instantly to the factory IT infrastructure via Ethernet. And tomorrow, we’ll see them connect directly to the cloud, particularly as Narrowband IoT (NB-IoT) gains traction. How powerful the Industrial IoT (IIoT) and Industrie 4.0 revolution will be to manufacturing is undeniable, but is it accessible to all?

I can’t help but draw a parallel with the advances in electric vehicles, analogising that whilst we’re all well sold on the benefits, for the majority of drivers, it’s currently unviable. Whether that’s the restrictive cost of the vehicles themselves or the immediate lack of adequate infrastructure, certainly in the UK few are able to take that leap, yet. The affluent are accessing the latest vehicles with vast ranges and thankfully, they have government support improving the infrastructure. In Industrie 4.0, only manufacturing behemoths can afford to ride this first wave; manufacturing SME’s simply can’t afford it.

With the cost of replacing factory machinery ranging from hundreds of thousands to millions, smaller manufacturing operations can’t justify upgrading purely to access this control and monitoring revolution. Industrie 4.0 is often sold on efficiency improvements, and unless that’s by an unprecedented factor, it’ll never cover (in any reasonable time-frame) the replacement of a machine. What these operations need is a retrofit.

For decades, production monitoring in SMEs has been exclusively anecdotal from employees, though many a Production Manager doesn’t realise even decades old machinery often has some basic monitoring functionality built in. Even basic Boolean statuses can become powerful when unlocked with the right tools. For example, digital outputs from aged machinery will normally provide at least an on/off status and a “cycle complete.”

Below is an example of how a small manufacturing business can move from anecdotal “it was down for “about a half hour last night” to a downtime percentage with many decimal places, with a graph produced purely from monitoring on/off signals. Here we can see that the factory owner could justify removing machine 3 if he can achieve better productivity on machines 1 and 2. This would reduce maintenance, energy, and staff costs and would immediately recover the investment to gather this data. 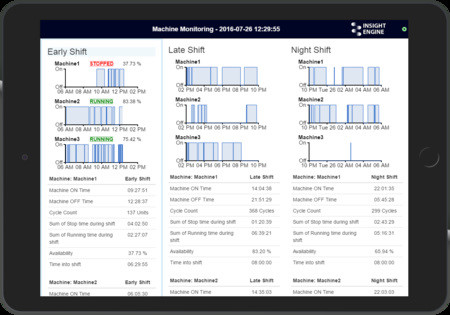 Retro-fitting this capability requires a fairly basic industrial I/O converter, taking microcontroller- or PLC-derived digital/analog and serial signals and converting to Ethernet. This sounds easier than it actually is; whilst these output lines are surprisingly available in relatively ancient technology, they’re certainly not labelled and the bulk of this retrofit is reverse engineering the signals. Once you establish what data streams are available, the magic is in the server-side software, and once pointed at the correct data, it’s “fit and forget.”

Deploying this monitoring software onto the local server in these factories isn’t always a smooth process. Creaking server hardware combined with local access issues or lack of knowledge is the second biggest challenge facing those retrofitting these monitoring solutions. System integrators typically want to use a large industrial human-machine-interface. This HMI shows live data and in the background takes on the role of the server, removing the reliance on existing IT infrastructure.

With cloud accessibility, this HMI can be configured as a web-server enabling real-time monitoring from any device, anywhere in the world. It doesn’t exactly deserve the label of Industrie 4.0, but maybe Industrie 3.5. For big manufacturers, this is half-baked, but it’s still a revolution for many manufacturing SMEs.