In Part 4, we?ll dive into the derivation of the noise gain transfer function.

The AC transimpedance amplifier discussion, in my previous blog, TIA Fundamentals: The Parasitics Part 3, provides an understanding of the circuit’s noise gain and stability. In Part 4, we’ll dive into the derivation of the noise gain transfer function.

Putting It All Together

An evaluation of the noise gain response in any amplifier circuit should include a look at the gain of a signal on the amplifier’s noninverting input to the amplifier’s output pin. The complete transimpedance circuit’s noise gain transfer function is:

AOL(jw) is the open-loop gain of the amplifier over frequency.

ZFB(jw) is the complex feedback impedance

ZIN(jw) is the complex input impedance

This simplification renders the 1/β first-level transfer function calculations where:

To reduce this noise gain equation (Equation 1) into a pole and zero format, our transfer function is now Bode plot-ready with one pole and one zero (Equation 4).

A good tool for determining stability is a Bode plot. At this point, let’s discuss some basic analog design guidelines. Classroom instructors will tell you that stable phase margins are greater than 0°. Not true. Out in the field, you are better off designing with a phase margin of 45° or higher. If you drive a step signal into a circuit on a PCB, with a positive phase margin close to 0°, you will have a circuit that will oscillate out of control. This instability comes from unexpected, component parasitics, or uncharacterized capacitances in the PCB layout. The same step signal into an analog circuit with a 45° phase margin will produce approximately 30% overshoot above the input step signal. You will also produce a damped signal that will eventually settle down.

The appropriate Bode plot for this design includes the amplifier’s open-loop gain and the 1/β curve. System elements that determine the noise gain (1/β) frequency response are the photodiode parasitics and the operational amplifier’s input capacitance (ZIN) as well as the elements in the amplifier’s feedback loop (RF, CRF, and CF) (Figure 2). 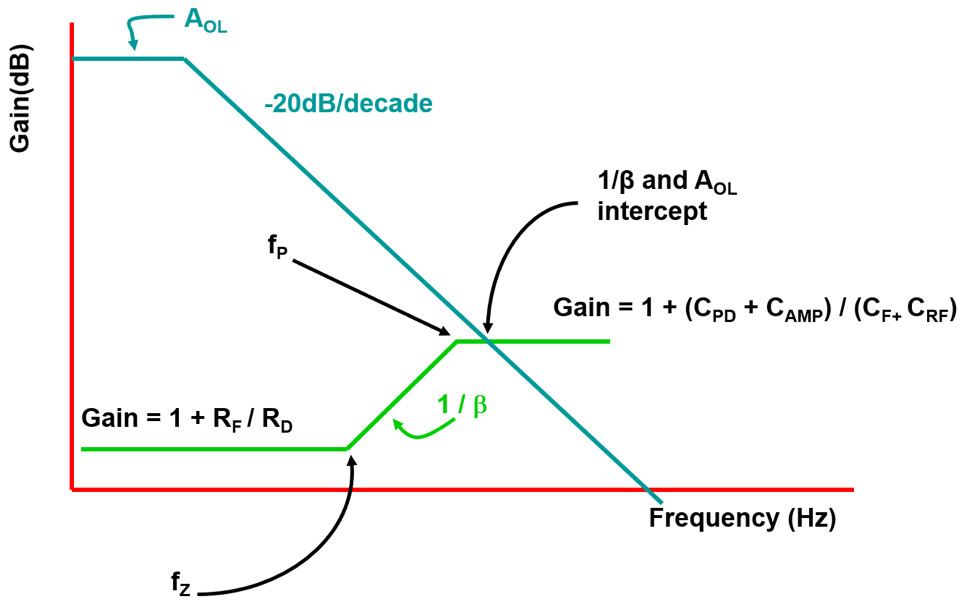 Figure 2. The closure rate between the closed-loop gain (1/β) and the amplifier’s open-loop gain (AOL) is 20dB/decade.

There are important 1/β curve gain values and frequencies to pay attention to in Figure 2. The 1/β curve DC value is equal to 1 + RF/ RD. In this ratio, RF is the TIA’s feedback resistor, usually in the range of 10kW to 10MW.

On the other hand, RD is the photodiode parasitic resistance. This parasitic resistance represents the zero-bias p-n photodiode junction. The materials for photodiodes (and their optic range) are silicon (190nm - 1100nm), germanium (400nm -1700nm), indium gallium arsenide (800nm - 2600nm), lead sulfide (<1000nm - 3500nm), or mercury cadmium telluride (400nm - 14000nm). The photodiode ranges of parasitic shunt resistance are from tens to thousands of megaohms.

The third important 1/β gain curve’s characteristic are the frequency corners, fZ and fP. The following formulas for the corner frequencies (fZ, Equation 6) and pole (fP, Equation 7) are:

The final interesting part of the Figure 2 graph is where the 1/β curve intersects the AOL(jw) curve. The closure rate between the two curves generally suggests the value of the TIA circuit’s phase margin.

There are three ways to correct circuit instability: 1) increase the feedback capacitor, CF, value; 2) change the amplifier to have a higher unity-gain bandwidth; 3) use a different photo detector with a different input capacitance.

But let’s cut to an easy solution for the discussion above. Equation 8 shows a conservative calculation that emulates a Butterworth response with a 65o phase margin and a 5% step response overshoot.

Equation 8 allows you to vary not only the amplifier bandwidth/input capacitance but the the feedback resistor value as well.

In this blog, we’ve shown a way to complete a TIA design, and have shown a clear way to select the TIA’s feedback capacitor (CF). As you are guessing from Equation 8, there are two variables that require further definition àRF, fGBW. Join us for part 5, where we’ll become familiar with the photodiode and learn how your application can help define the photodiode output range, and hence determine the feedback resistor’s value and amplifier selection.