Medical Electronics in a Handset

In hopes of migrating imaging equipment from hospitals and clinics to doctors’ offices, makers of this equipment were focused on creating imaging devices that were smaller, lighter, less costly,... 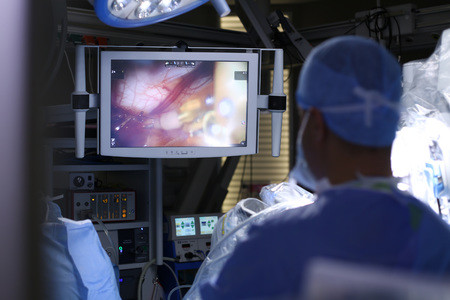 In hopes of migrating imaging equipment from hospitals and clinics to doctors’ offices, makers of this equipment were focused on creating imaging devices that were smaller, lighter, less costly, and easier to read. A new medical technology trend called BYOD (for bring your own device) capitalizes on the on-going miniaturization made possible by semiconductor electronics—and converts your cell phone into an ultrasound scanner.

Before wearable electronics became fashionable for remote patient monitoring, medical electronics was focused on “big iron,” namely MRI machines, CAT scanners, X-ray machines, and Ultrasound scanners. In the past 15 years, semiconductor makers have made huge contributions to the trend toward making this equipment smaller, lighter, and easier to use.

Ultrasound scanners have been reduced from refrigerator-sized consoles to something that fits inside a suitcase. GE’s portable Vivid e ultrasound, considered among the most feature-laden diagnostic tools when it was introduced 10 years ago, still shows up in the used equipment market.

The market for medical diagnostic equipment is still dominated by those big iron suppliers, GE, Philips, Siemens, and Hitachi, according to market research firm, Markets and Markets. They claim that theglobal ultrasound market will reach $6.86 billion by 2021 at a CAGR of 5.2%.

However, the most startling contributions to the medical imaging market include devices that not only shrink the size of an ultrasound scanner but make it small enough to serve as a smartphone attachment—hence BYOD. One good example of BYOD portability is the Philips Lumify probe. It is an attachment and a smartphone app which lets users capture ultrasound images with their Android phones. Philips’ promotional literature (for doctors and clinicians) implies that every consumer could obtain clear, easy-to-interpret scans, “With Lumify, high-quality portable ultrasound is available almost anywhere. Just subscribe, download the Lumify app, plug in the transducer, and you’re set. Meet patients at the point-of-care, make a faster diagnosis, and deliver care whenever it’s needed.”

In operation, ultrasound scanners work like a phased-array radar: a series high-frequency signals (up to 5 MHz) are beamed into a patient’s torso. Dimensions of internal organs and their special features are imaged by a probe reading the high-frequency signals as they bounce off the object, or are absorbed, or change frequency and wavelength. Contrasts between, for example, layers of skin, muscle, and body fluids would be calculated from the probe, evaluating the time it took for the radio waves to bounce back. In addition to high-speed multi-channel data converters, the imaging process is aided by DSP filters and high-resolution LCD screens.

Many pregnant women have visualized their babies in the womb with ultrasound scanners, but this hardly describes the new versatility and sensitivity of the scanning machinery. Modern ultrasound equipment can detect cancer cells in a patient, several centimeters beneath the surface of his skin. Portable battery-powered scanners can be used for emergency triage, searching for broken bones or damaged organs at the scene of an accident.

Physicians insist, sometimes adamantly, that ultrasound images, which are black and white, with soft edges and shadows, should only be read and interpreted by specially-trained personnel. To aid the clinician, and make the ultrasound images easier to interpret, scanners are often equipped with presets, or instrument settings that focus on specific medical conditions such as cancer cells or broken bones.

Presets offered by handheld scanners like Philips’ Lumify, MobiSanti’s MobiUS SP1, or FujiFilms’ SonoSite make it easier for physicians to visualize internal organs, blood flow, or soft tissue patches. For emergency medicine, there are settings which allow fast scans to detect the impact of trauma, as well as the now-familiar support for OB/GYN images. Of particular interest are ultrasound scans of the lungs, once difficult to visualize because signals would be dissipated by the relatively soft tissue inside the chest cavity. This obstacle has been overcome with new-generation equipment.

While the use of smartphone attachments promises to blur the lines between professional data generation and consumer-generated imagery, most medical practitioners are not ready to jump on the bandwagon. Doctors will ultimately have the biggest say on how portable ultrasound is deployed and used. We would expect them to be resistant, particularly those in the U.S. who complain that every additional piece of equipment increases their liability insurance.

Rudy Ramos is the Project Manager for the Technical Content Marketing team at Mouser Electronics. He has 30 years of experience working with electromechanical systems, manufacturing processes, military hardware, and managing domestic and international technical projects. He holds an MBA from Keller Graduate School of Management with a concentration in Project Management. Prior to Mouser, he worked for National Semiconductor and Texas Instruments.