5G is paving the way for autonomous cars

Is it merely a coincidence that both 5G and autonomous car projects share the common implementation time frames of the late 2010s and early 2020s? Yes, it is. But the fact that these two gigantic...

Is it merely a coincidence that both 5G and autonomous car projects share the common implementation time frames of the late 2010s and early 2020s? Yes, it is. But the fact that these two gigantic technology roadmaps are converging and colliding isn’t just a coincidence. 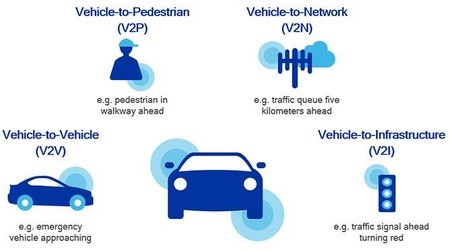 [Vehicle-to-everything (V2X) communications — serving as the foundation of the connected car movement — is also becoming a key enabling technology for the autonomous vehicles. Image courtesy of Qualcomm]

The next frontier after getting cars fully connected is automated driving, a.k.a. autonomous cars. According to Intel’s CEO, Brian Krzanich, an autonomous car can generate as much as four terabytes of data in a day, so a robust and pervasive communications infrastructure is imperative in moving more data at higher speeds and lower latency with utmost reliability.

The 5G network will help vehicles keep tabs on cars, cyclists, and pedestrians in the vicinity while serving as glue between the key building blocks of advanced driver assistance systems (ADAS) and self-driving cars. In other words, it will facilitate split-second connectivity for cameras, radars, and other in-vehicle sensors providing the 360-degree view. Then, there are machine learning tasks for image and speech recognition that require faster and ultra-reliable data links along with greater compute power and data synthesization capabilities.

The autonomous car brings forth massive data challenges, so 5G is most likely going to become part of the automated driving ecosystem by facilitating large chunks of data via roadside communication infrastructure. There isn’t much automotive connectivity in play right now, and many industry observers attribute this to the lack of automotive friendly features in the 4G LTE networks. The 5G systems claim to offer five times lower latencies than predecessor 4G networks while enabling the more intelligent use of the radio spectrum through software-defined networks (SDN), network slicing, and virtualization techniques.

The creation of the 5G Automotive Association (5GAA) is clearly a harbinger of the convergence between mobility and connected automated driving. The multi-industry body is carrying out cross-sector collaboration to facilitate road safety and intelligent transportation for autonomous cars.

Majeed Ahmad is former Editor-in-Chief of EE Times Asia. He is a journalist with an engineering background and two decades of experience in writing and editing technical content. He is also the author of six books on electronics: Smartphone, Nokia’s Smartphone Problem and The Next Web of 50 Billion Devices, Mobile Commerce 2.0, Age of Mobile Data, and Essential 4G Guide.