There's a new addition to the STM32 portfolio of products. And, according to the folks at STMicroelectronics, it's a major addition. The high-density...

There’s a new addition to the STM32 portfolio of products. And, according to the folks at STMicroelectronics, it’s a major addition. The high-density STM32H7 series of microcontrollers (MCUs) embeds up to 1 Mbyte of SRAM, up to 2 Mbytes of dual-bank flash memory. The family is aimed at “smart” devices that can take advantage of a rich connectivity peripheral set.

The high density comes from a move to a 40-nm fabrication process. A byproduct of the highly integrated technology is a performance level of 2010 Coremarks and 856 DMIPS. In addition, the technology enables high-speed data transfers through the system while consuming less than 280 μA/MHz in run mode and less than 7 uA in stand-by mode. 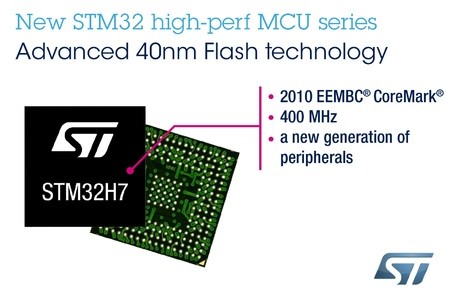 The first device in the new series is the STM32H743, which features the ARM Cortex-M7 CPU core running at 400 MHz. To facilitate the necessary security, integrated features include cryptographic accelerators with provisions for secure-key storage.

Some of the on-board communication peripherals the device supports include CAN FD, SDCARD (4.1), SDIO (4.0), and MMC (5.0). In addition, the analog functions include low-power 14-bit ADCs running at up to 2 Msamples/s, 12- bit DACs, op-amps, and 22 timers (one high-resolution timer runs at 400 MHz).

The STM32H7 MCU series incorporates the company’s Dynamic-Efficiency energy-saving techniques that they claim consumes half the dynamic power of predecessor MCUs. Power consumption can be adjusted dynamically according to performance demands. In addition, a batch acquisition mode captures data directly into memory without waking the core from its energy-saving mode.

Six packages, ranging from an LQFP100 to a TFBGA240, are sampling now. The STM32H743VGT6 with 1 Mbyte of flash memory and 1 Mbyte of SRAM in a 100-pin LQPF100 package starts at $8.17 for lots 10,000. Production volumes will be available in the second quarter of next year. Evaluation boards and development kits will be available, along with a host of embedded software.