Wireless coexistence studies and mitigation technologies for unlicensed 2.4 GHz frequency bands have been around for at least 20 years. The issue is t...

Wireless coexistence studies and mitigation technologies for unlicensed 2.4 GHz frequency bands have been around for at least 20 years. The issue is that different 2.4 GHz wireless technologies meet different needs for the same devices, and therefore must operate simultaneously without noticeable performance degradation. This two-part article discusses the growing need for a Wi-Fi and Zigbee/Thread managed coexistence and explores coexistence techniques through industrial design, co-management technologies, and best practices for Internet of Things (IoT) applications in the 2.4 GHz band. In part one we addressed elements of unmanaged coexistence. In part two, we will focus on managed coexistence.

Market trends of higher Wi-Fi transmit power, higher Wi-Fi throughput, and integration of Wi-Fi and IEEE 802.15.4 radios into the same device have the following impacts:

Managed coexistence takes advantage of communication between the co-located Wi-Fi and IEEE 802.15.4 radios to coordinate each radio’s access to the 2.4 GHz ISM band for transmit and receive. Silicon Labs has implemented a coordination scheme for the EFR32 wireless SoC compatible with Wi-Fi devices supporting Packet Traffic Arbitration (PTA)[1]. This PTA-based coordination allows the EFR32 to signal the Wi-Fi when receiving a message or wanting to transmit a message. When the Wi-Fi device is made aware of the EFR32 SoC requiring the 2.4 GHz ISM band, any Wi-Fi transmit can be delayed, improving zigbee/Thread message reliability.

PTA is described in IEEE 802.15.2 (2003) Clause 6 and is a recommendation, not a standard[1]. IEEE 802.15.2 originally addressed coexistence between IEEE 802.11b and IEEE 802.15.1 (Bluetooth Classic) and does not describe an exact hardware configuration. However, IEEE 802.15.2 recommends that the PTA implementation consider the following (PTA commands represented in capitals):

In considering the radio state, transmit/receive, and frequencies, IEEE 802.15.2 describes interference possibilities as shown in Table 1. 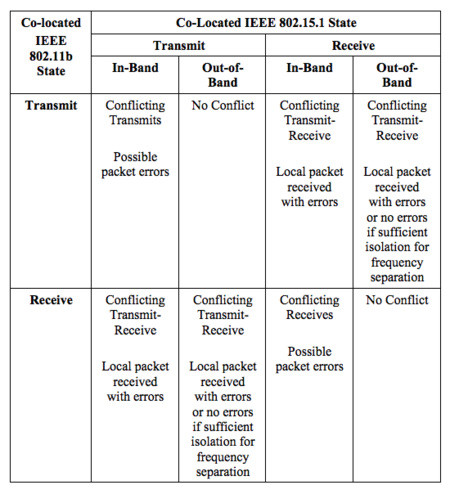 As such, for managed coexistence, Silicon Labs recommends continuing to implement all of the Unmanaged Coexistence recommendations:

One example of a common PTA configuration is the 3-Wire configuration shown in Figure 1. In this case, a PRIORITY signal is used in conjunction with REQUEST and GRANT to signify that a high- or low-priority message is either being received or transmitted. When a REQUEST is received, the Wi-Fi/PTA device compares this external priority request against the internal Wi-Fi priority, which may be high/low or high/mid/low, and can choose to either GRANT Bluetooth or Wi-Fi (Note: PRIORITY can be implemented as static or time-shared (enhanced) priority).

Given the relatively low RF duty cycle of IEEE 802.15.4, static PRIORITY can always be asserted at the Wi-Fi/PTA input with the EFR32 PTA operating in 2-Wire mode. This frees a GPIO pin on the EFR32 and eliminates a circuit board trace.

Silicon Labs conducted extensive testing of its PTA implementation for IEEE 802.15.4 with multiple Wi-Fi chipsets. In summary, the following observations were based on measured results:

Figure 2 shows results from one of the tests carried out by Silicon Labs and highlights the positive impact that PTA has, when enabled, on zigbee message failure rates in the presence of Wi-Fi. Message failure is reduced further by re-enabling APS retries (disabled in the tests shown in Figure 2 below). 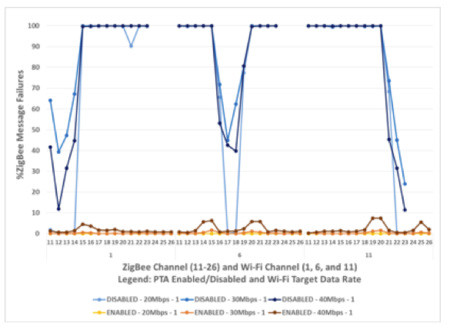 As the Internet of Things (IoT) expands and evolves, an increasing number of Wi-Fi-enabled gateways will add Bluetooth, zigbee, Thread and other wireless protocols to enable communication with connected devices in homes and buildings. Moreover, as home and building automation systems increasingly add cloud connectivity, more and more home controllers will add Wi-Fi to their existing low-power radios. Consequently, there will be enormous growth in the number of gateway/controller type devices that include Wi-Fi and other 2.4 GHz radios and protocols, including Bluetooth low energy (BLE) and IEEE 802.15.4-based zigbee and Thread.