The ICE-Lok was developed to reduce thermal resistance compared to traditional card retainer clamps, commonly referred to as wedge locks.

The ICE-Lok was developed to reduce thermal resistance compared to traditional card retainer clamps, commonly referred to as wedge locks. Wedge locks have been around for decades, providing a useful mechanical connection to easily attach, service or replace electronics cards; however, as power densities have continued to increase, they have become a thermal bottleneck of conduction cooled chassis. The ICE-Lok reduces temperature gradients through this choke point. Figure 1 below shows a card frame with the ICE-Lok integrated. In this example, heat pipes are used to efficiently move heat to the sidewalls. Therefore, the biggest concern was heat transfer through the retainer clamp. The ICE-Lok provides both the mechanical and thermal connection from this card frame to the chassis. 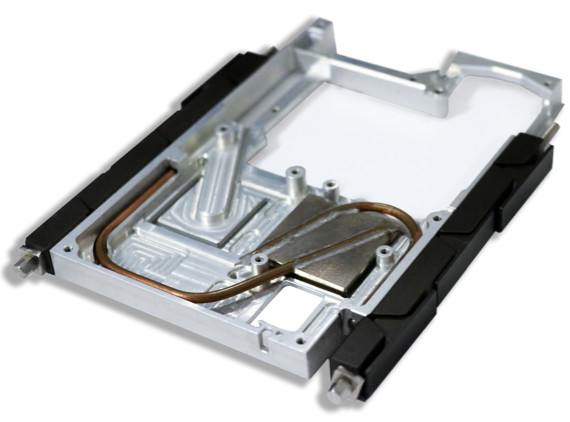 The concept behind the ICE-Lok is simple; it’s designed to increase the number of contact points between the heat spreader and the chassis. These additional surfaces provide two benefits: (1) it adds surface area to directly improve heat transfer and (2) it allows heat to bypass the metal to metal interfaces within the locking mechanism.  In a standard wedge lock, the clamp is mechanically attached to the card frame or heat spreader using mounting screws. The heat spreader slides into the chassis card guides and the retainer clamp is activated to create a mechanical and thermal link between the heat spreader and chassis. The activation method is an axial screw which, when tightened, presses the “wedges” together.  This force shortens the wedge lock in the axial direction but expands the wedge lock in the vertical direction; which creates force on the card guide (See Fig 2).

Using similar operation (fastener that presses “wedges” together), the ICE-Lok™ contacts two (2) surfaces on the heat spreader and two (2) surfaces on the chassis (See Fig 3b). This creates three distinct thermal paths, each of which does not require heat transport between segments. Test results have shown greater than a 30% reduction in overall thermal resistance compared to COTS wedge locks.

After testing, it was apparent the product was well designed, but there was no data available to help designers simulate performance using computational models. The challenge was the significant number of variables that effect thermal performance; force applied at each dry interface, friction effects, and surface finish as examples. To simplify the characterization efforts of the ICE-Lok, a sequential modeling approach was used. First, a detailed model consisting of each “wedge” and interface was used to characterize heat through each of the three (3) paths. The results of this model demonstrated 30.2% of heat escaped through the Direction A in Fig 4, 22.1% through Direction B and 47.7% through Direction C. After obtaining the heat distribution, a simplified model of the entire clamp was developed. This essentially utilized a solid rectangle spanning the gap between the heat spreader and chassis. Adjusting the bulk thermal conductivity (keffective) and interface resistances to match the detailed distribution model and recorded test data, allows us to greatly simplify the model. Table 1 shows the input conditions for modeling ICE-Loks™ varying the applied torque.

With these results, engineers can now use a very simple model to predict performance at this interface. By simplifying the computational model, it allows designers to add the necessary complexity of their boards and run complete models without significant run times.