Patience is a virtue, but in modern society, rarely a reality. The unrelenting pace of life has led to a heightened sense of urgency in so much of what we do. To address this, there is an...

Patience is a virtue, but in modern society, rarely a reality. The unrelenting pace of life has led to a heightened sense of urgency in so much of what we do. To address this, there is an increasing need for automation in hotels, retail outlets, and offices. By automating systems, we can improve all manner of day-to-day tasks, or even offer completely new products and services. For example, refilling and replenishing equipment (think coffee machines, photocopiers, and the like), requesting service (in a café or shop), or ensuring maintenance is carried out in a timely manner. However, installing the technology required to support such activities can be complicated and expensive.

There is a growing need for hardware that can deliver the expected levels of automation and be cost-effective. To address this need, UK startup ContinuumBridge created a solution called Spur, which allows someone to initiate a call to action then get an instant visual indication that their request is being dealt with, enabling facilities management, leisure, and retail operators to timely respond to customer or staff requests without replacing or upgrading existing equipment.

A Spur system consists of standalone, wirelessly connected buttons that transfer data to cloud servers via a wireless network. Each button features a small display to provide visual feedback. There are two ways Spur can be implemented. One is for the user to push a button to signal something, perhaps to report a fault. The button displays an acknowledgment, informing the user that a member of staff will deal with this. Once the fault has been taken care of, the staff member can reset the button’s display. Alternatively, the Spur button can reset itself after a short period of time. The main use for this second type of implementation is evaluation – asking someone to answer a few questions to rate the service they’ve just received, perhaps when checking out of a hotel.

When the engineers at ContinuumBridge first started looking at the technology to form the basis of Spur, certain key attributes were required. Each Spur unit would be remotely located and wouldn’t necessarily have access to mains electricity. Consequently, the units would need to draw as little power as possible to prolong their operation. When choosing a display technology, standard TFT or OLED weren’t viable: both technologies’ needs for backlighting and continual refreshing meant they were too power-hungry.

Using an e-paper display (EPD) was a much more attractive option. EPDs possess properties that make them far better aligned with this sort of application. They give designers and engineers a power-efficient means by which to display text and graphics, only drawing power when you change the information on the display. Once there, the content remains visible without consuming any further power. Another vital advantage of EPDs, especially in this context, is that unlike some other display technologies, their contents remains readable in direct sunlight.

EPDs comprise millions of micro-capsules placed between two transparent electrodes. Each of these capsules contains electrically-charged spherical pigment particles, the position of which change when you apply an electrical charge to the electrodes above and below. Apply a negative charge to the top and you attract the positively charged pigment into view; apply a positive charge and the negatively charged pigment becomes visible. This approach enables you to render text and various forms of imagery on the display. And because these particles remain in position once the charge is removed, the display continues to show the same content indefinitely, until you apply an opposing charge. This differentiates EPDs from TFT/OLED devices, as they do not need an ongoing current supply, thereby making them far more power-efficient. 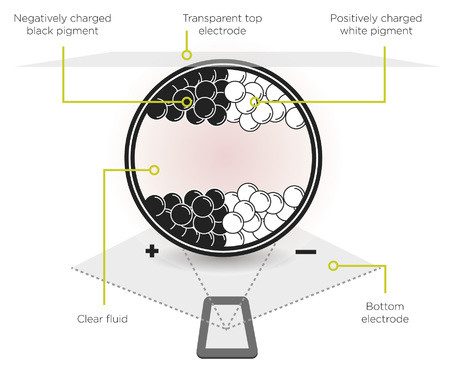 By using EPDs, Spur units can operate on a single battery for five years with an average of 20 button-pushes per day, delivering a long service life without the need for periodic battery replacements.

The increasing deployment of technology in locations where a mains power supply is either impractical or impossible will further raise the appeal of e-paper technology. Consequently, in areas such as building automation, IoT, logistics and many other application scenarios, the use of EPDs will become more and more commonplace.

Scott is CEO of Pervasive Displays and has over a decade of experience in software, in addition to 12 years working in the displays businesses. During his career, Scott has been a founding partner at four start-up companies, including Pervasive Displays. Scott sits on the board of several other technology businesses as a consulting partner. He was a board member of One Laptop Per Child (OLPC), which looks to provide kids in developing countries with a rugged, low-cost, low-power, connected laptop. Scott has an MBA from the Haas School of Business at the University of California, Berkeley, as well as a BA from the University of Michigan at Ann Arbor, US.

Scott is the CEO of Pervasive Displays, a BOE Group company. He has 11 years' experience in software service/applications and 16 years' experience in hardware components and applications. He is an executive at SES-Imagotag, a Paris-based Euronext listed company, and previously led 4 business units in Chilin Technology, part of the Taiwan-based Chimei Group.