Failure to identify infrequent events when debugging waveforms can cost engineering teams a lot of time and money later in the development cycle.

Unfortunately for these development teams, oscilloscopes that are capable of delivering the sampling rates and resolutions needed to capture these intermittent waveform anomalies often come at price tags in the tens of thousands of dollars — not something you’re likely to find on your average engineer’s workbench.

Currently, the typical oscilloscope with bandwidths greater than 1 GHz, 12-bit or higher resolution, and sampling rates greater than 1 GS/s have an average price tag of over $20,000. This price point is a high barrier to entry for many engineering organizations.

The Rohde & Schwarz MXO (Mixed Signal Oscillator) 4 series of oscilloscopes attempts balances performance capabilities with cost efficiency by delivering a number of industry firsts, according to the company, at a price point of just under $8,500. The 16-channel, 5 GS/s ‘scopes have bandwidths of 200 MHz – 1.5 GHz and are built around a 200 Gbps processing ASIC, 400 Mpts simultaneous standard acquisition memory on each of four channels, and a 12-bit ADC that provides 18-bit vertical resolution across all an instrument’s sample rates.

There’s also a digital trigger with a sensitivity of 1/10,000 division that isolates subtle physical layer anomalies hiding amidst signals.

These building blocks support MXO 4 series capabilities, such as:

For ease of usability, the MXO 4 series includes a full-HD, 13.3” capacitive touchscreen, VESA mounting, and a rackmount kit.

For embedded systems engineers, the biggest benefit of the MXO 4 series may be the ability to capture longer time periods during testing while maintaining a high sample rate. You can see this in action with an RF bursted pulse with a 50ms capture rate.

The precision of the digital trigger in the MXO 4 reveals events and anomalies that simply aren’t captured on other leading scopes. The ability to acquire, process, and display signals at speed simplifies the debugging of complex workflows, including math, long acquisitions, measurements, or spectrums. 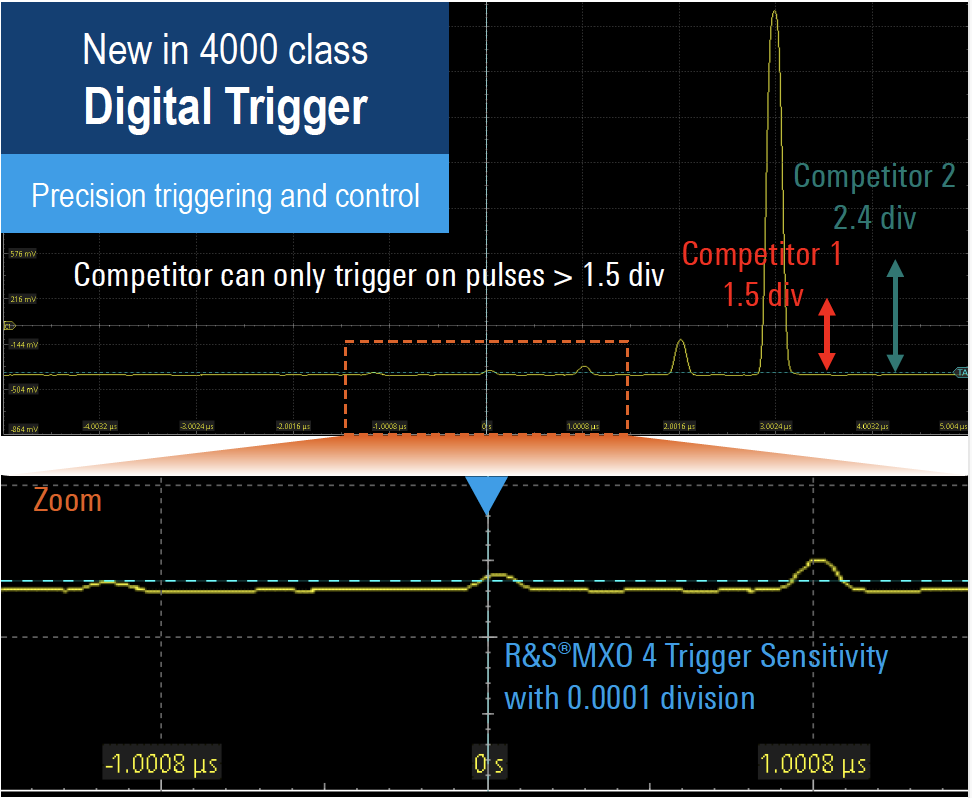 When it comes to precisely debugging waveforms, here’s how the MXO 4 series stacks up against the competition:

If your engineering team requires the ability to see infrequent events over long capture periods during the testing and debug phase of your product development lifecycle, the Rohde & Schwarz MXO 4 series oscilloscopes are worth a look. They start at $8,435, or you can go here to get a quote for custom configurations.