According to the 2015 Energy Efficiency market report by the International Energy Agency (IEA), commercial buildings account for more than 30% of glob...

According to the 2015 Energy Efficiency market report by the International Energy Agency (IEA), commercial buildings account for more than 30% of global energy consumption. A building’s energy services include the monitor, control and maintenance of lighting, temperature and water-heating systems, among others.

A BAS is a communication network infrastructure that manages various building services. The key to an effective BAS, as shown in Figure 1, is having a ubiquitous system that can serve new and old building technology, as well as small and large commercial facilities. With well-established automated solutions, competent energy management is possible through building-to-building communication rather than just building-to-grid communication. Both wired and wireless communication protocols must be incorporated into these systems driving further intelligence.

A building automation device network typically includes both a primary and secondary bus, which are connected to various system nodes such as the building management system (BMS) units and zone controllers and end nodes. Control systems are connected to the BMS through the primary bus. These back-end control systems comprise a centralized and interlinked network of devices that monitor and control the environment. Such control units are designed specifically for building automation and can support single or multiple networks and communication protocols. 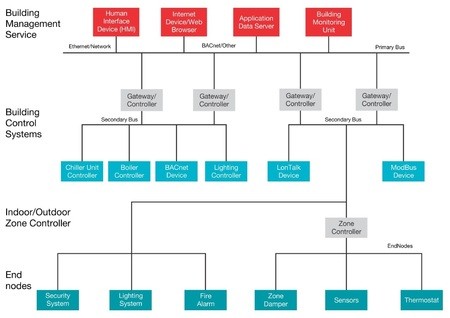 The primary and secondary bus might connect to devices such as low-level controllers, simple I/O devices, and end-user applications, such as room thermostats or alarm-monitoring systems. Control systems monitor distributed devices in the building, managing the priority structure of the network and providing feedback to other controllers. Getting the data from the various system nodes to the control systems requires some sort of communication protocol. The primary and secondary bus may connect through RS-485, Ethernet, Controller Area Network (CAN) or a wireless connectivity network.

Some legacy systems in a building depend on wired protocols for communications between the controller and end nodes. Many new applications use faster wired protocols, which can transfer data from more sensors promptly. However, doing this in older buildings require significant infrastructure upgrades not to mention much larger software integration challenges. Using wireless protocols eliminates the need for huge infrastructure changes while facilitating enhanced user and management experience.

Additionally, with the increase of IoT devices and smart sensor technology, such end nodes are attainable. And while wireless protocols can help solve the infrastructure challenges, it does introduce further software and system integration complexity, given the mix of wireless technologies enabled in these end nodes.

The most prominent wired communication protocols, which might be based on serial interfaces such as RS-485 or Ethernet for faster communication, include:

As mentioned, there’s a growing trend for wireless support in end-node applications, which today use one of four protocols:

BAS developers continue to explore a scalable, cost-competitive solution that supports standardized open communication protocols. Wired and wireless protocols are now integrated into every facet of building control systems. TI’s SimpleLink MCU platform offers a broad portfolio of wired and wireless MCUs which are highly integrated, low-power solutions that enable developers to quickly add connectivity protocols to end nodes in BCS systems. With common software across all of the SimpleLink MCUs, code is reusable from application to application, making it easy to add functionality to new or existing applications.

Read this white paper to learn more about Building Automation and how connected MCU’s are propelling the IoT integration.