Why do I go to CES every year? That's a question I'm sometimes asked by technologists in the embedded space. It's also one that may have been asked of...

Why do I go to CES every year? That’s a question I’m sometimes asked by technologists in the embedded space. It’s also one that may have been asked of members of Bosch’s Sensortec and Connected Devices and Solutions business units. Of course, neither of these divisions sells products directly to your typical consumer, and neither do I. But we serve the original equipment manufacturers (OEMs) and engineers that do, and, at least in Bosch’s case, the extent of that is somewhat mind blowing.

Bosch consumed an enormous booth in the Las Vegas Convention Center at CES 2017, with all of its various groups converging on a space in Central Hall. There I was able to track the journey of embedded sensor technology into commercialized products, all of which was prompted by a conversation with Dr. Stefan Finkbeiner, Chief Executive Officer of Bosch Sensortec GmbH.

You could see examples of this market expansion at the Bosch booth, as Sensortec was showcasing its sensor products in end products ranging from sensor-enabled toothbrushes to the Oculus Rift (BMI055) and Google Daydream (BMI160, BMP285) that employs some of the company’s MEMS. But how they actually get designed into these systems is another matter.

A proof point of this at CES was just on the other side of the Bosch pavilion, where engineers from the Connected Devices and Solutions division were showcasing the Bosch XDK, a Wi-Fi and Bluetooth-enabled development kit that equips eight Bosch Sensortec MEMS sensors and is accompanied by a software development kit (SDK) and development environment, the XDK Workbench. Among the Sensortec sensors included in the XDK are an accelerometer, gyroscope, magnetic sensor, ambient light sensor, and noise, pressure, and temperature sensors, which are accessible through a 20-pin extension header, debug port, MicroUSB connector, and programmable push buttons. In the spirit of such dev kits, extension boards can be snapped in to access additional features, such as advanced sensors or LoRa connectivity, and an XDK app for Apple and Android is also available for good measure. 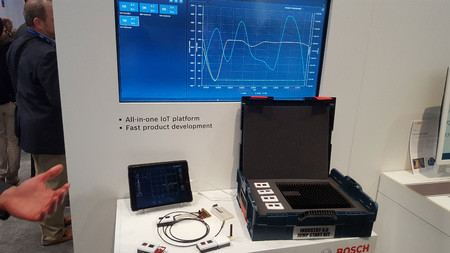 As so often is the case with such vendor-created boards, the XDK was originally created for use by Bosch engineers, but when they started getting requests for evaluation platforms, the company decided to take the platform to market (for $180 via Mouser). All of this culminates in the visit’s finale, in which the folks at Bosch showcased a Transport Data Logger based on the XDK platform that enables logistics tracking, and, as you may be able to tell from the image below, doesn’t stray much from the XDK’s fundamental design. Who ever said “engineering ain’t easy”?

You can find detailed information on the Bosch XDK on the Development Kit Selector, sponsored by Digi-Key.