Click here to access the updated Development Kit Selector tool In a column earlier this year I introduced a project to help embedded and Internet of T...

In a column earlier this year I introduced a project to help embedded and Internet of Things (IoT) design engineers efficiently identify evaluation kits for system prototyping. At the time I placed various restrictions on the kits that would be considered, for example, only those that were equipped with wireless technology, whose vendors had partnerships in place with various cloud providers, and so on. I was also reticent to include kits I viewed as more exclusive to the hobbyist market, such as the Raspberry Pi, BeagleBoard/Bone, and the ubiquitous Arduino. However, after seeing kits that fall outside of these parameters repeatedly used by professionals for prototyping – and at times in commercial deployments – I’ve adjusted my strategy. 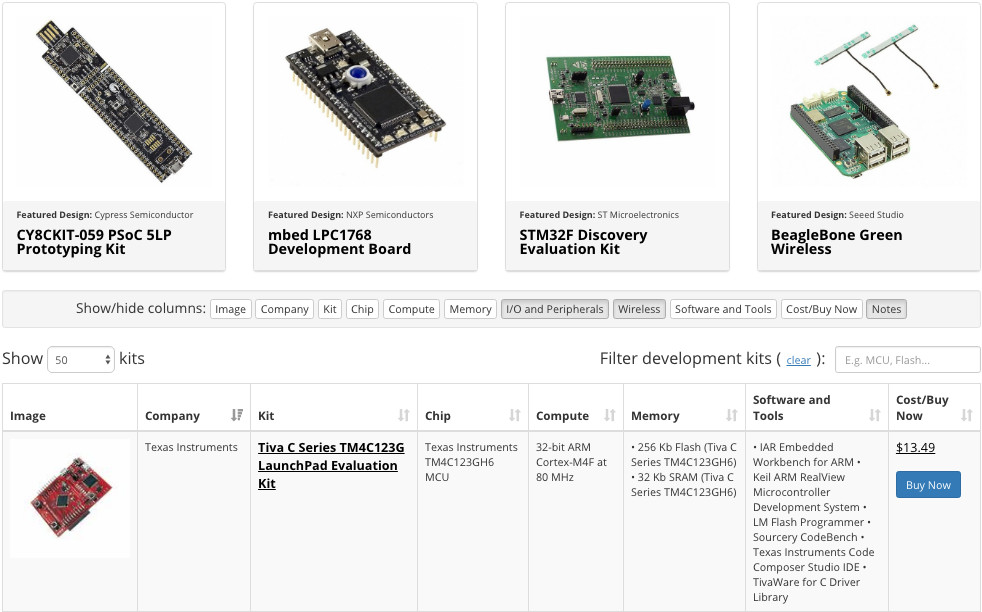 I opted to remove the cloud requirement, as cloud services offerings are not bundled with most kits, and even if they are it’s not a requirement to use them or for unimpeded operation of the kit (also, a cloud selector sounds like a good tool of its own). Also, on-board wireless is no longer mandatory since a great many useful, low-cost development kits employ a modular, add-on approach to connectivity through clicks and capes. Next, given the widespread use of certain “Maker” platforms in legitimate development lifecycles (and, frankly, because some of them are just all-around better systems than those from vendors), I’ve decided to include the Arduinos and BeagleBones of the world as well. Finally, I’ve added in a parameter simply called “Chip” that calls out the exact microcontroller or microprocessor the kit is built around.

But the biggest change to you, the user, is in the functionality of the platform as it stands today. Upon visiting the latest version of the tool, you’ll notice a massive upgrade from the static image I originally provided to a dynamic, sortable table. In addition to a normal search function in the upper right, you are able to show and hide the navigation buttons to arrange the listing by:

Some additional information on the last two bullets will hopefully provide some clarity on the tool’s inherent structure, and how we will be maintaining it going forward is in order.

First, this rendition of the Development Kit Selector is the result of a partnership between Embedded Computing Design and Digi-Key, and the Cost/Buy Now field is intended to allow interested parties to be taken directly to the distribution source of a kit rather than returning to Google to search for how to obtain one. In addition, this gives me (and you) access to a large repository of commercial kits, rather than being forced to troll the Internet every time a kit is released.

Second, as you can imagine, this tool requires a large amount of datasheet diving on my part. Digi-Key has provided hundreds of kits for inclusion in the Selector, but, as you will see (or perhaps already have seen) we are currently displaying 25. Not to worry, though, as I will be updating the tool on a weekly basis with 5-10 new kits, which will be chronologically sortable using the “New Kits” field. If you subscribe to the IoT Design newsletter, therein you will be provided with an highlights of a few of the freshly uploaded kits from the past week. If you don’t receive IoT Design, you can subscribe for free.

Lastly, remember that this tool is designed for you, to help you with your design process. If you have any questions, suggestions, or comments on the format of the Selector, updates on kits or tools, or are curious about one kit or another, please leave a comment at the bottom of the page. I will be routinely monitoring this, and welcome your feedback.