The first of these functional equivalents is called a reference design/golden design, from which a model based on register transfer-level (RTL) code such as Verilog, System Verilog, or VHDL is used as a reference netlist. This netlist is verified against a corresponding netlist in the second design, known as the implementation or revised design (Figure 1). For the sake of simplicity, the reference/golden design will be referred to as the "Initial Design" for the remainder of this article, and the implementation design/revised design referred to as the "Target Design."

The following table shows a combination that can be used for comparison of the Initial Design with the Target Design.

This process requires that the initial netlist go through various levels of optimization, which in turn requires additional design for test (DFT) logic. Despite these requirements, the formal verification process should not alter the logic functionality of the design.

A functional equivalence check usually requires simulation of the two HDL designs using the same test vector. But, as ASIC technology shrinks and the complexity of circuits increases, it's not possible to use simulation to verify circuit functionality because the simulations might run for months. Therefore, formal verification plays a very important role by saving simulation run time as the well the huge resource requirements of those extended simulations.

Also, as the design goes through various stages from synthesis, place and route, sign-offs, and engineering change orders (ECOs), the formal verification must ensure that circuit logic functionality will not be impacted by any of the stages.

The flow for formal verification is pictured below. 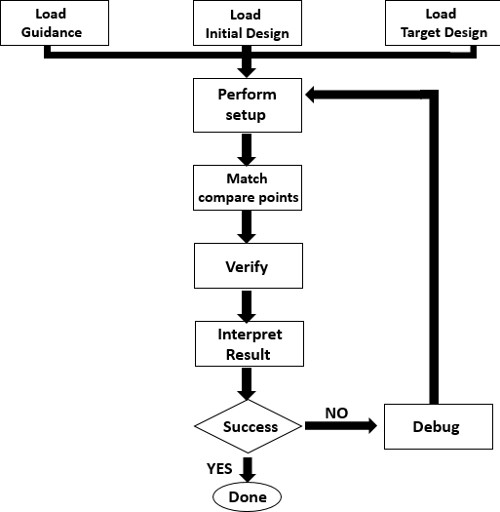 The following steps are performed during formal verification:

Read – The read step reads both the Initial design and Target design, as well as all the related technology libraries (Figure 3). It further partitions the design into the key equivalence checking concepts of logic cones and compare points: 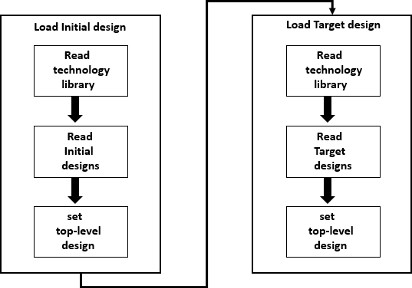 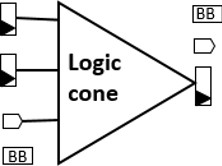 Setup – The synthesis tool provides all of the automated setup information, including clock gating and scan insertion, which is recognized by the formal verification.

Match – The matching process will first try to verify the guidance file and apply any guidance that has been set. The match will also try to match compare points based on the following:

?Verify – The verification cycle verifies logic equivalence for each logic cone of the reference design with the corresponding Implementation design. Formal verification algorithms use many solvers to prove equivalence or non-equivalence. There are four possible results:

Analysis of Report and Fixes

Once a formal verification run is complete, a report analysis can be generated and fixes can be performed, if necessary.

Because there might be some conversion happening from a normal flop to a multi-bit flop, resulting in the flop being reported as a non-equivalent point, DFF represents a potential fix.

Nitin works for eInfochips (an Arrow Company) Physical Design team, and has worked on PnR and Physical verification.