Back in March I wrote a pretty scathing piece asking, Has Microsoft forgotten about embedded? Six months later, they've remembered - and I hope I play...

Back in March I wrote a pretty scathing piece asking, Has Microsoft forgotten about embedded? Six months later, they’ve remembered – and I hope I played some role in jogging their memory!

My original piece unashamedly bordered on a rant, as the voice of so many left scratching their heads, asking where their XP Embedded and WES7/8 upgrade path went, exactly. Windows 10 IoT Core, as the name suggests, is really for the new embedded of highly integrated (invariably ARM derived) SoCs. So the only alternative for the embedded old school, a.k.a. non-IoT embedded, was the full-blown enterprise version with an enterprise price point. 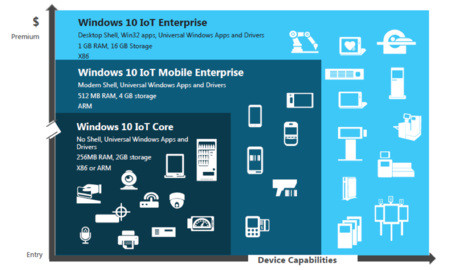 Incidentally, license cost cessations by means of SKU were made for retail, tablets, and point-of-sale, which crept close to embedded but could rarely legitimately be utilized. However, respect where respect is due – everything has changed in ways that those imminently at risk of becoming permanently soured with Microsoft in their embedded applications could only dream of.

The headline must be the new SKUs, with licensing costs that go beyond the demanded equality with those previous componentized enterprise flavors. Last month, whether your system was a low power Intel Atom or the latest Core-i7, and even if it was just performing a single basic function, you paid the full enterprise cost. Now the Core-i7 is used as the absolute maximum under the new SKU structure, with Core i3/i5 based systems’ licenses slashed by nearly 50 percent. The real headline news for me and for swarms of others out there is that Intel Atom/Celeron-based systems receive over an 80 percent discount!

This answers the question of those engineers who are pondering if now is the time to migrate away from Microsoft. I’m a big fan of the ease of use of Windows 10 and, as I wrote back in February this year, I remain convinced Android isn’t ready for embedded, and vice versa.

But while those new license price points are somewhat mouth-watering, there must be more, right? There is. Historically, benefiting from those lower license costs required investing around $1,000 in a development platform and multiples of that in developing your componentized image – not to mention the time involved. Of course, those creating these images often fell into a trap, so blinded by achieving a highly optimized image that adding new functionality necessitated starting from square one with a new image.

That too is a thing of the past. These new SKUs all install exactly the same, from exactly the same ISO. There are no functional restrictions or even decisions to be made. The license cost is derived from the processor. You’re free to use as little or much of the OS as you wish and when you wish, all while paying homage to the embedded flavors of old, with integrated write filters, activation-less deployment, and a rich suite of imaging tools.

Now, while it’s arguably always easy to deliver good news, I must provide recognition to Zul Smart, BDM of Windows Embedded at Avnet Embedded who delivered it. He has continually borne the brunt of my displeasure since my original piece earlier this year and has done everything in his power to make our voices heard. Which voice was heard? I don’t know, and I equally don’t care. My readers have got what they wanted: a mandate to use Windows 10 in non-IoT embedded, and much more.

Microsoft will be exhibiting at electronica 2016 in Munich November 8-11th.