It's been a week of test drives - not cars, of course, but development kits. Today, I'm taking a spin on the $49 Cypress Bluetooth Low Energy Pioneer...

It’s been a week of test drives – not cars, of course, but development kits. Today, I’m taking a spin on the $49 Cypress Bluetooth Low Energy Pioneer kit. A big differentiator for this particular kit is a YouTube video that gets the user started. I’m not saying that the other kits didn’t have similar videos. But if they did, they weren’t made as obvious as the Pioneer kit video. The video told me the basic things I needed to know and gave me a brief tour of the components, hardware and software, that I already had or needed to download. 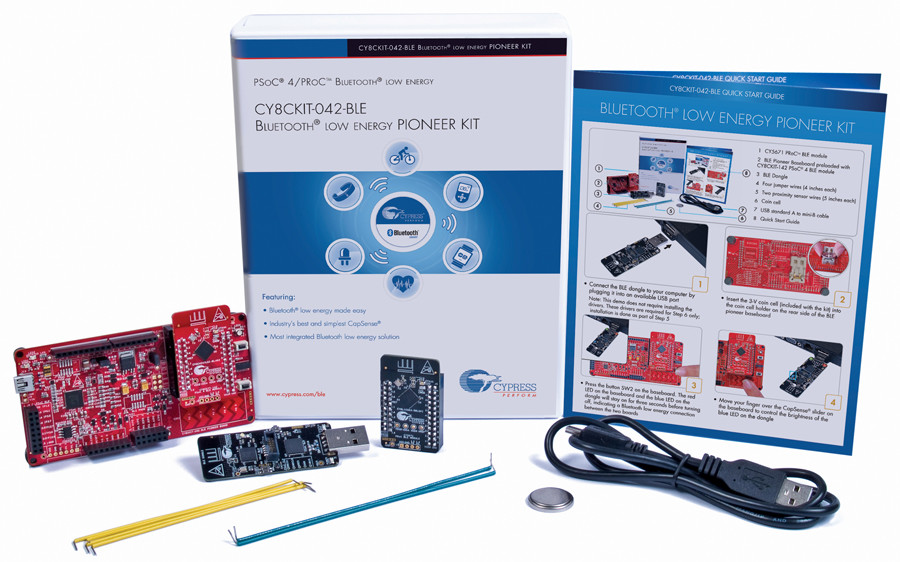 First thing I did was download the latest PSoC Creator IDE, which is version 3.1. It’s a pretty big download, so be prepared. Then I installed the CySmart mobile app for iOS onto my iPhone. The final download was a Getting Started with PSoC 4 BLE application note. Then, I watch the video. I stopped the video at various points to replicate the things I was seeing on my actual hardware. As I’ve stated on many occasions, the ability to blink (or change color of) an LED is still a thrill, knowing what’s actually going on behind the scenes.

The CapSense touch sensor, which Cypress has received some acclaim for, worked as advertised. Swiping my finger along the sensor on the board showed the reaction on my iPhone. Again, to a casual observer, the reaction would be, “Big deal.” But knowing what it takes to move that image on my phone really excites me.

The IDE that I downloaded gave me a bunch of example projects that I could view and play with. Using the tool, all APIs and code generation happens automatically. I went through a bunch of the examples, and with just a few errors (mostly because I was being careless), I was able to execute each of them.

The bottom line is that if you’re designing an embedded device that could benefit from the benefits of Bluetooth Low Energy, I suggest you consider the Pioneer kit.