How IoT is transforming the automotive software development lifecycle

As you may know, QNX has been producing safety-critical software for real-time systems since the late 70s, and at the IoT Evolution Developers Confere...

As you may know, QNX has been producing safety-critical software for real-time systems since the late 70s, and at the IoT Evolution Developers Conference, Andrew Poliak of the RTOS powerhouse explained how that legacy is translating into the connected car.

Though fully autonomous vehicles are still at least 10 years out according to Poliak, the need for automakers to change their maintenance habits and management habits from reactive to proactive has been accelerating for some time. Much of this change is a direct result of consumer technology finding a home next to the safety-critical systems of automobiles, as the smartphone revolution has, either by force or by choice, prompted automakers to:

The new automotive software development lifecycle therefore requires fault diagnostics and logs, cloud-based analytics, OTA software updates, distribution of OTA updates to various ECUs, and enhanced security, all made possible through IoT implementations. For the more visual of you, imagine the automotive SDLC migrating from something like this: 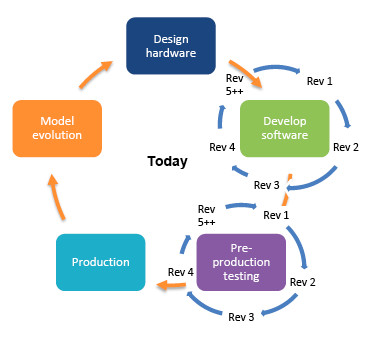 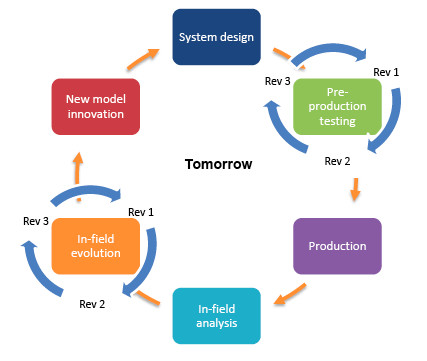 The promise of the IoT is that the above development model helps mitigate the endless ‘bolt-on’ coding that has left cars with more software than advanced jet fighters. As OTA capabilities approach GB updates to support the integration of V2X modules that will support the fully autonomous car, QNX is looking to advance these software development paradigms for subsystems ranging from acoustics and infotainment to telematics with an emphasis on security, which Blackberry’s David Kleidermacher addressed in a session on Wednesday.