No one could accuse Avnet Silica of plastering "IoT" over its electronica 2016 stand without substance. This year, they are showcasing three discrete...

No one could accuse Avnet Silica of plastering “IoT” over its electronica 2016 stand without substance. This year, they are showcasing three discrete demonstrations of the power of their much publicized Visible Things IoT platform, claimed to “deliver rich functionality from edge to enterprise with outstanding cost, power, and size specifications.” Geared towards industrial markets, their Visible Things solution professes to realize leading-edge functionality across security, cognitive analytics, and embedded vision applications.

The first will be a brand new gateway product specifically for the industrial IoT (IIoT) space, premiering at electronica this year. Details are currently sparse, but all will be revealed within the fortnight.

The second will be a claimed unique security architecture pushing enterprise-grade security from the cloud, through the gateway, and into the smart sensors themselves at the network edge, also encompassing non-IP based sensors. 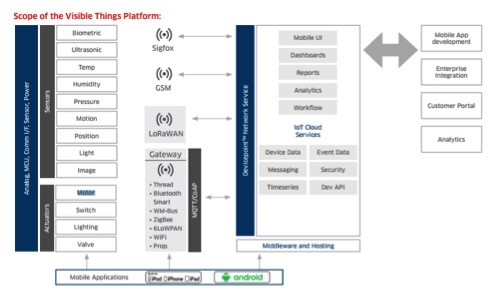 The third will be an embedded vision system that demonstrates image capture from relatively basic sensors with high end cognitive analytics occurring in the cloud enabling both real-time and historical analysis.

Those professionally involved (or personally fascinated) by the revolution in automotive should then head to Hall A6, Booth 127. There you will learn how embedded vision and gesture control are transforming the vehicles of the future, whether that’s true vehicular autonomy or the increasingly detailed information we can access while we’re still doing the driving ourselves. Of course, the sheer quantity of information generated from in-vehicle sensors isn’t viable nor necessary for each driver to process. V2V and V2I deployments offer autonomy themselves, directing navigation systems to avoid traffic and a plethora of other benefits many won’t even notice.

Avnet Silica will be exhibiting at electronica 2016 in Munich November 8-11th.