Make no mistake—there is a real cost involved in moving from an older architecture like COM Express to something that’s brand new like COM-HPC. It’s up to you to weigh that cost verses the benefit that it brings. Generally, it’s the application that makes the decision for you.

First, here is some background. COM Express is a computer-on-module architecture that’s supported by a host of vendors, in terms of both baseboards and modules. Backed by PICMG, it’s defined by many features, but one of the key ones is its 8-Gbit/s bandwidth. That’s good enough for a slew of applications. But if that’s not enough what you’re trying to accomplish, COM-HPC might be just what the doctor ordered, as it offers a 4X improvement, up to 32 Gbits/s. 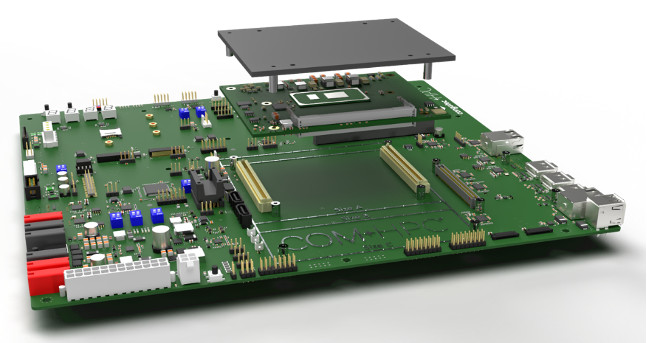 The COM-HPC standard provides an obvious upgrade path for compute-intensive embedded application, as vendors can swap in a higher performing processor module when it becomes available.

One good way to look at COM-HPC is for investment protection. While the up-front cost of deploying a new architecture could be slightly higher, your platform is likely to remain in the field for far longer, thanks to the improved specifications and features. A primary goal of the specification was to provide that investment protection and scalability for diverse IoT and Edge applications, including AI and deep learning. And as 5G becomes mainstream, even more applications will emerge.

“Many enterprises are deploying platforms with autonomous decision-making capabilities and differing workloads at the edge,” says Pawitter Bhatia, a product line manager at Intel. “These trends are driving the need for different system profiles, especially the increased compute power and I/O to meet the requirements of these potentially demanding applications.”

The modular nature of COM-HPC enables design choices and flexibility for easy scalability, as well as upgradability, which can also be viewed as investment protection. Those choices include a host of CPU and memory options.

COM-HPC modules are available in five different sizes. The first, size A (114 cm2), is comparable to a COM Express module. Moving up to sizes B (144 cm2) or C (192 cm2) provides lots more space for additional components, such as memory, VPUs, FPGAs, and/or other accelerators. The largest sizes, D (256 cm2) and E (320 cm2), can fit standard memory RDIMMs and UDIMMs. And more thermal options are available with COM-HPC as compared to COM Express. Hence, processors (and memory) that throw off more heat can be accommodated.

“One of the major advantages of the COM-HPC architecture is that you can share the same module and use it across different applications,” offers Joel Finkel, a customer engineering architect at Intel. For example, you could use an Intel Mobile Core processor in an ultrasound machine, in a point of sale system, or in a slot machine.

Scale Up or Down

A second major advantage of COM-HPC is the ability to scale up and down with different module pairing options on the same carrier board. Take a piece of test equipment, for example. An entry-level product may use an Intel Atom-class SoC, while a mainstream version might have an Intel Mobile Core product, and a higher end premium version may have a Core desktop CPU and chip set. Each of those processors would reside on a module, which gets plugged into a similar carrier board. Even if the characteristics of the processor change, you’re just charged with redesigning the module rather than the entire motherboard.

Most industry observers would say that compute products have a lifespan of three to five years before something new comes along. By employing the COM-HPC architecture, the overall system can be deployed far longer by making those module upgrades. To get a better understanding of how this could affect your design, watch the video featuring Intel’s Bhatia and Finkel.