5G mobile networks will provide a number of new capabilities by increasing per-user bandwidth, increasing the number of users/devices, service isolation through segmenting the physical 5G network resources into separate virtual “network slices” much like VMs virtualize a hardware platform. Initially, IoT architecture was envisioned as a large number of distributed sensors communicating with a centralized cloud environment. However, some IoT applications have requirements that need intelligence at the edge. This runs contrary to the centralized cloud architecture. Instead, these intelligent edge compute elements make up a “distributed cloud” environment where there is a certain level of command and control at the edge in addition to collaboration and coordination across the elements. Pluribus Networks has announced a solution that combines 5G network architecture with an SDN/NFV distributed cloud environment to enable a number of applications requiring intelligent edge capability. The announcement makes it attractive for mobile operators to utilize the Pluribus Networks solution to provide new IoT and M2M architectures with localized intelligence.

Evolution from Centralized to Distributed Cloud

IoT started with the same paradigm - deploy sensors, connect the sensors to network gateways that provide an internet on-ramp to a central cloud where all sensor data are processed, analyzed, stored, and controlled. However, not all IoT applications requirements can be met by centralized cloud architecture due to:

In order to address this, Mike Capuano, Chief Marketing Officer with Pluribus Networks, believes that the emergence of distributed data centers will become the norm rather than the exception.

“In order to address challenges associated with a centralized cloud environment for IoT applications, there will be an explosion of mini and micro data centers,” Mike said. “Increased bandwidth, reduced latency, safety, and privacy aspects are all catalysts of edge compute. 5G isn’t the only driver, but it plays an important role.”

Placing functions at the edge requires a small version of a cloud environment data center with the added need to communicate and collaborate between intelligent edge peers.

“These distributed cloud elements will be deployed within the context of a traditional cloud model. You’ll spin up containers, pay for what you use, then spin down containers.” Mike continued by saying “these edge environments will likely not be hierarchical, but meshed – there will be multiple edges and they will need to communicate and coordinate in a distributed manner.”

For example, telcos have a number central offices and cable operators have a number of head end locations deployed. These are typically within 5,000 feet of the subscribers. This represents an ideal opportunity to be emerging edge colocation providers for the distributed cloud. Specific to 5G, these mini-clouds will likely be deployed at the base station. For IIoT applications, this will logically extend to an oil rig or warehouse, or factory building. This enables one critically important feature – the workload can be deployed at the lowest cost location while still fulfilling operational requirements.

Controller Based and Controllerless SDN

If network head ends, mobile network base stations, and office buildings are going to become mini or micro data centers, then what is the architecture? Software Defined Networking (SDN) and Network Functions Virtualization (NFV) certainly play an important role.

Controllerless SDN involves the SDN intelligence and network state residing in every switch. As the number of switches scale, they still work and act like one logical switch. There is a mesh of VXLAN tunnels across the switches that provide multiple communications paths for redundancy and the architecture makes it easy to insert additional switches as needed. Given the distribution of the cloud, using a controllerless SDN architecture in turn provides key features that enable distributed network resources as well.

The figure below shows how the adaptive cloud fabric architecture works. The data center locations may be large or small, stand-alone or co-located ad network or on-premise facilities. The architecture allows the fabric to be organized in multiple slices for isolation and security between slices and simplified operation and maintenance. 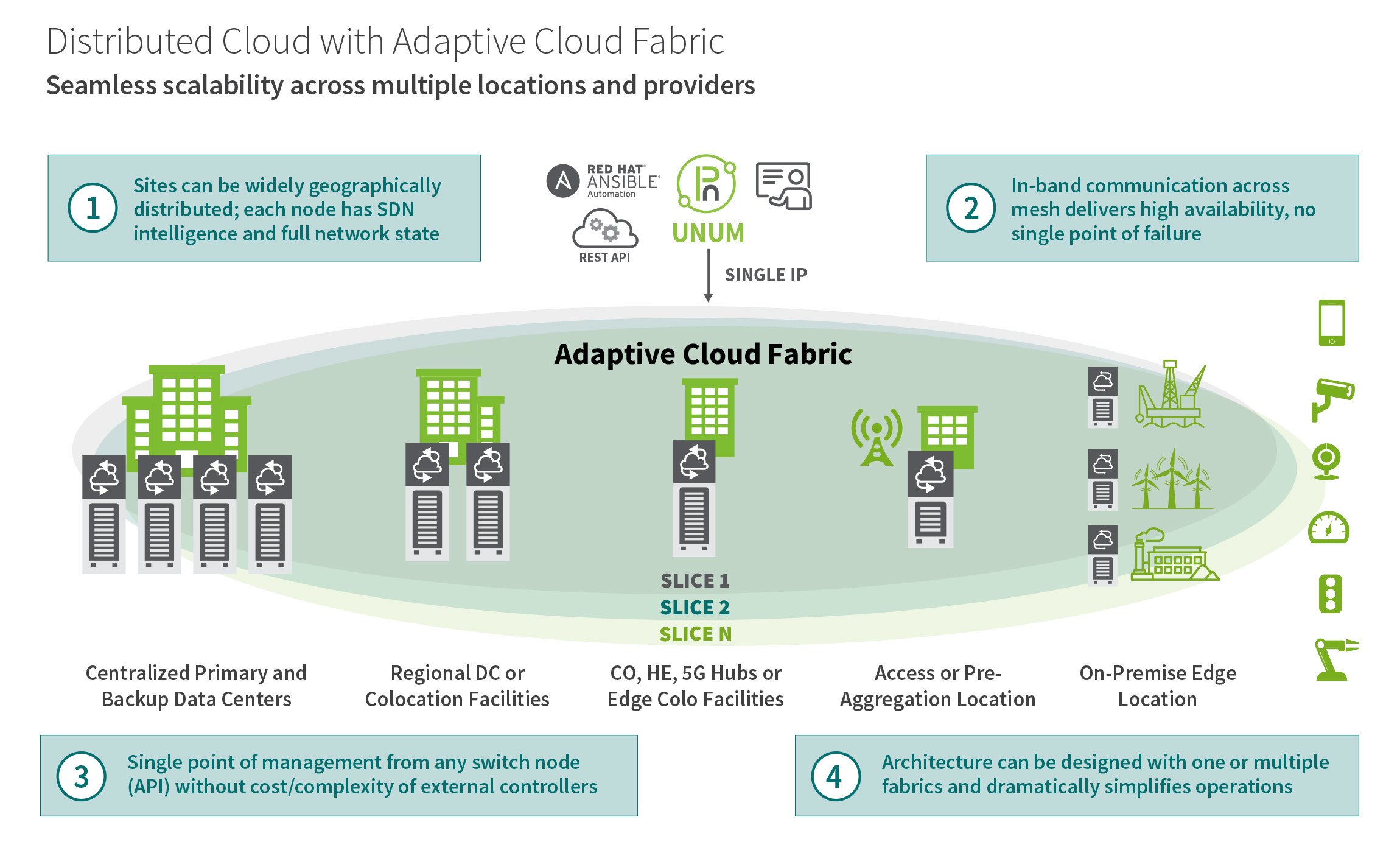 While the Pluribus Network announcement is focused on the distributed cloud architecture for mobile network operators, traditional cloud service providers and enterprise IoT applications will benefit from this as well.

The ability for a cloud service provider to expand regionally and manage smaller cloud locations as one entity with distributed services is a powerful capability. For enterprise IoT applications, isolating and distributing IoT traffic can segment untrusted IoT devices for security while being faster and simpler to roll-out without unforeseen impact to existing IoT systems.