For many years, microcontrollers have been a staple in various products, continuously revolutionizing their feature sets, reliability, and performance. Moore's Law has brought 16- and 32-bit processing to even the smallest and most affordable consumer products.

The presence of larger memory and CPU power has allowed the use of real-time operating systems (RTOS) where previously developers had to rely on "bare metal" coding. However, as products have evolved to become connected devices in the context of IoT, it has revealed fundamental shortcomings in the traditional methods of software development for microcontrollers.

This article is the first in a series of articles covering a new IoT architecture that promises relief: a microvisor-based approach.

Integrating and maintaining external components not only increases the lifetime costs of a product, but it also fails to provide any added value or differentiation in the market, being invisible to the end-users. This has led to a significant amount of resources, both in terms of time and money, being wasted on recreating connectivity solutions for every IoT product, rather than focusing on unique features or capabilities.

Additionally, the lack of relevant domain knowledge and the pressures of complexity, budgets, and schedules, leads to latent security issues that can compromise the security of the product in the future. To get relief from these burdens, many businesses resort to IoT platforms, as can be seen from a recent survey by Transforma Insights – and rightfully so. 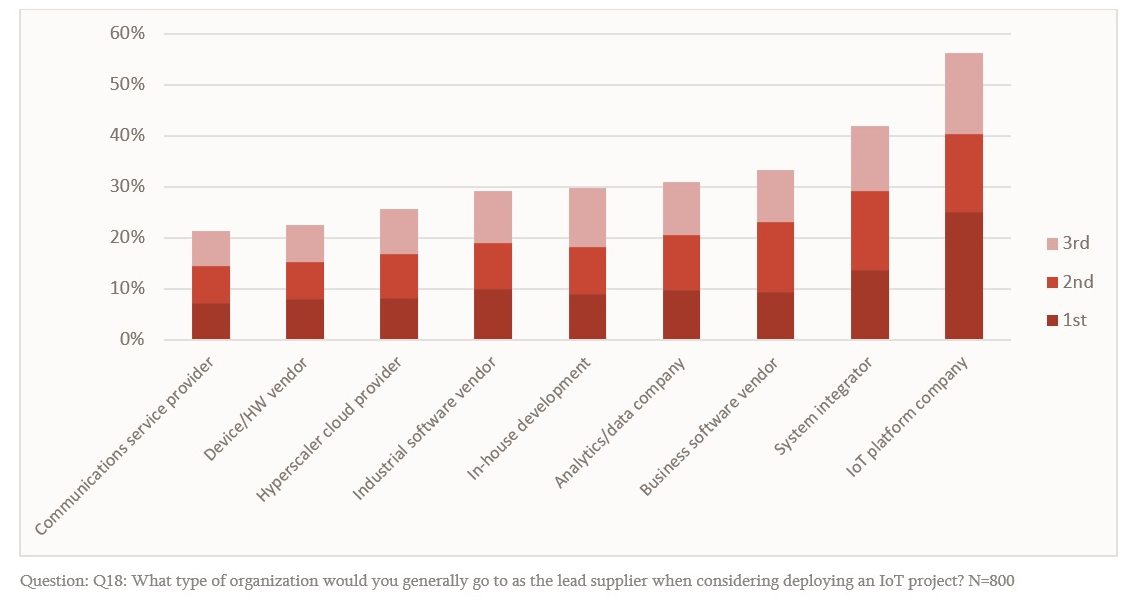 Several key factors impact the viability of any IoT project – especially in the industrial sector:

The convenience of using a pre-built platform for IoT device management, to take care of security, the capability of OTA firmware updates, and device lifecycle management, is highly appreciated by many users. However, these platforms can also be quite restrictive in terms of developer flexibility, limiting choices in programming language, operating system, and development tools. While this level of control may be suitable for end-users who are new to hardware and firmware engineering, it can present a significant obstacle for experienced developers looking to integrate connectivity into their existing devices. Industry analyst Arnal Dayaratna, IDC, calls this requirement of openness out in a recent market note on edge application development, saying:

"Prioritize portability: Developing for the edge requires digital solutions to be fundamentally portable and compatible with a multitude of infrastructures." ~Arnal Dayaratna, IDC, "Developing for the Edge: Notes Toward a Definition of Edge Application Development", Published September 2022, ID US47198921

The microvisor approach to IoT platforms is promising alleviation. IoT platforms based on the microvisor architecture may offer the above-mentioned features of remote firmware updates and remote device lifecycle management, but without imposing a vendor’s choice of operating system or programming language. Furthermore, it can do so with increased levels of security, and offer entirely new IoT capabilities, such as live, line-by-line remote debugging of firmware.

A microvisor is an IoT approach using hypervisors for microcontrollers, which enables reliable and secure remote operations, such as failsafe over-the-air firmware updates, on Internet-connected devices.

Architecturally, a microvisor makes use of hardware separation within a microcontroller – such as the STM32U585 from ST – to divide it into two sections at boot time, e.g. by leveraging Arm® Trustzone®. 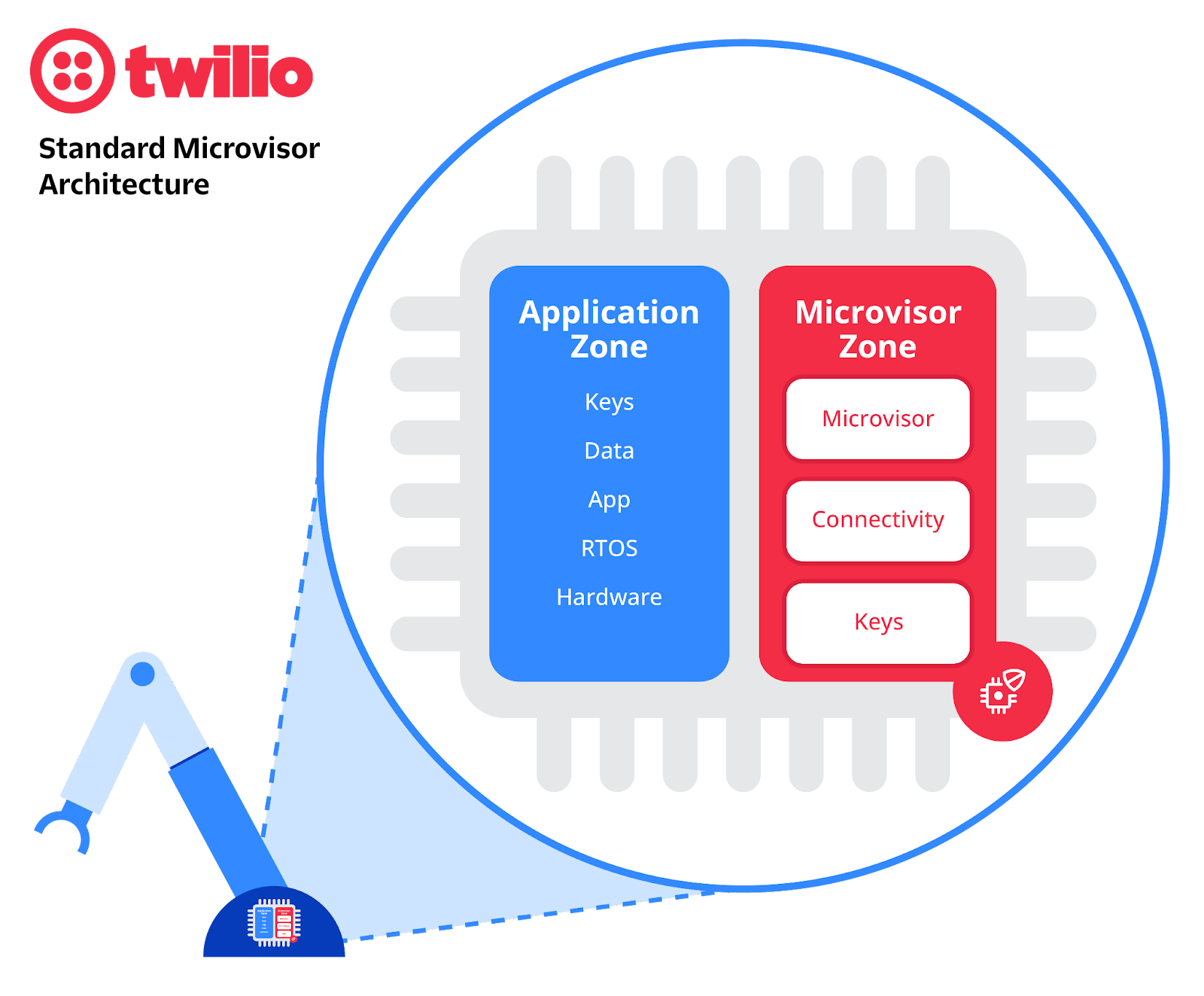 A microvisor-based IoT platform does not impose any limitations on which OS or language must be used. It adapts to any approach in embedded development, whether it is

One of the key capabilities that a microvisor-based architecture allows is over-the-air (OTA) firmware updates, but in a way that does away with requiring 2 versions of the firmware on the device in case of failures.

The division of responsibilities in the microvisor architecture ensures reliable and consistent connectivity for IoT devices. The microvisor takes care of maintaining the IP stack, as well as the firmware and drivers for Wi-Fi and/or cellular modems. I.e. everything your device needs to get connected and stay connected.

The reliability of the connectivity, which eliminates the risk of "bricking" the device, opens up new opportunities for firmware development. This allows for decoupling the process of hardware manufacturing from the firmware development process. With the ability to perform frequent and reliable firmware updates, hardware manufacturers can produce devices even before the firmware has undergone complete testing. (It remains to be seen, however, if this level of agility, previously only seen in web and cloud development, will be adopted by device builders.)

As with any approach to FOTA (firmware updates over-the-air), saving bandwidth is critical, especially for cellular-connected devices that incur cost for data usage. The update service must be aware of the device’s current operational manifest, which defines what code/data should be stored in each defined memory area—either within on-die flash or in QSPI flash. Accordingly, when a new package is queued for FOTA, only areas which do not match would be deployed to the device.

A microvisor-based approach is no different, and the microvisor takes care of moving data required to apply an update from the cloud to a staging area in device QSPI storage, where it remains encrypted. Once the device has all the changed parts of the application stored safely in the staging area, it applies the upgrade in a fail-safe and restartable way, to ensure the upgrade appears atomic from the application’s point of view.

How Can I Learn More About Microvisors?

If you’re interested in diving deeper into the microvisor architecture, consider reading the Twilio whitepaper “Architecture and Design Considerations for Modern IoT Infrastructure”, which is organized into two parts.

Part I addresses a broader audience, such as IoT product managers, project managers, and engineering managers. It lays out a typical device-side IoT architecture and describes the traditional approach of implementation. It details the associated challenges and develops an argument for a different approach, now made possible through the hardware advancements described above.

Part II addresses the experienced embedded engineer and explains Twilio’s thinking with regard to how the above-mentioned challenges can be effectively addressed with a new architecture.

Or stay tuned for our 2nd part of our article series, in which we will dive deeper into the remote debugging capabilities coming with a microvisor-based approach to IoT. 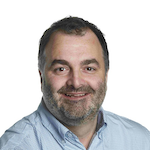 Jonathan Williams is a Product Manager for IoT and Wireless at Twilio. Having worked in both the semiconductor industry as well as in cloud video communications, he has a focus on building developer-friendly platforms that solve real world problems. When not working on bringing IoT products to market, he can be found tinkering with his 1970’s rally car.