It’s important to understand why it became necessary for Intel to revamp its GPU line (along with its visual identity), as it was already a leader in the PC market. However, AMD has recently made up significant ground in the desktop space over the last 12 quarters (the typical timeframe to develop a new chip), making it clear that Intel needed to offer a full range of compute solutions and expand beyond CPUs. 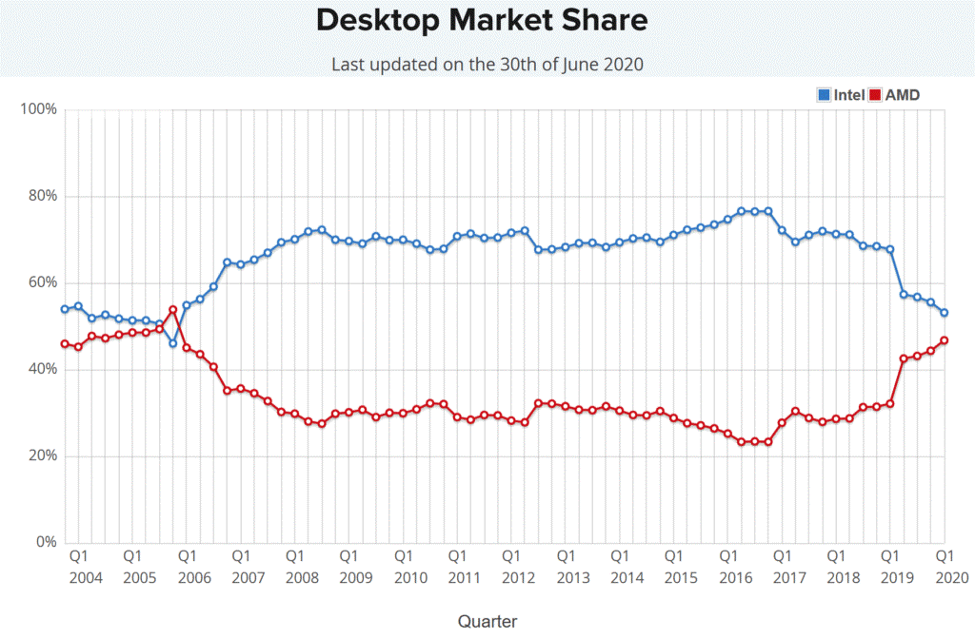 In fact, this process began in 2018 when Intel began making serious changes to its roadmap and reemphasizing FPGAs and GPUs. Although many thought that the acquisition of Altera years before was in an effort to kill competition, it actually proved to be a testing ground for the much broader strategy of developing a high-performance GPU solution that went beyond the company’s integrated graphics offerings.

The desire to increase GPU market share was accelerated by the emergence of artificial intelligence and machine learning technologies that are likely to drive demand for more compute performance as their adoption increases. With Moore’s law already failing, PC performance alone is not going to be enough to support the excessive demands of evolving deep learning algorithms over the long term. The need to accelerate the performance of entire systems was apparent, and FPGAs/GPUs were the de facto choice for supplementing CPUs.

As a result, CPUs were becoming commoditized and the real game would be played in accelerators, where Intel has historically had a weak hand. To support this endeavor, Intel created a powerful team to support the recently launched Intel Xe graphics portfolio, including Raja Koduri, formerly the head of AMD’s Radeon unit, and Jim Keller, a famed chip designer and Lead Architect at AMD.

Could it be that the third time is a charm for Intel after its brief attempt to re-enter the graphics space with Larrabee and Xeon Phi in 2009? Only time will tell. But this certainly emphasizes the importance of GPUs in the next wave of AI and machine learning computation.

Charles Darwin is back for the survival of the fittest in embedded processing.

Prasant Agarwal is Marketing Director at Softnautics. He has 15-plus years of experience in developing cutting-edge multimedia and connectivity products for STMicroelectronics, Samsung, and Solarflare Communications (Now Xilinx) and led corporate rebranding for Persistent Systems. Leveraging his technology domain and experience, he is now focusing on enabling technology buyers to make the right business choices by bridging business challenges and best-fit technology solutions.

Connect with him on LinkedIn.