Information technology, FDI, and economic growth in India: An overview

Foreign Direct Investment (FDI) is fund flow between countries by which one can gain some benefit from their investment, while another can enhance the productivity and find a better position...

Foreign Direct Investment (FDI) is fund flow between countries by which one can gain some benefit from their investment, while another can enhance the productivity and find a better position through performance. The effectiveness and efficiency depends upon the investor’s perception: If an investment is long term, then it contributes positively towards the economy. If it is short term for the purpose of making profit, then its economic impact may be less significant. The FDI may also be affected by government trade barriers and policies for foreign investments and may be less or more effective towards contribution in economy and in GDP of the economy as well as the information technology sector. This paper conducts an empirical analysis of India using time series data to see if there is empirical evidence that supports this assumption.

The success of Indian software industry has captured the imagination of both India and the world. For a country, attracting an inflow of FDI strengthens the connection to world trade networks and finances its development path. Foreign investment plays a significant role in development of India’s economy. FDI acts as a bridge to fill the gap between investment and saving. Many countries provide incentives for attracting the FDI. A foreign direct investor may be classified in any sector of the economy and could be any one – an individual, a group of related individuals, a public company or a private company, a government body or any combination of these.

Information technology (IT) can potentially be used in every sector of the economy. The true impact of IT on growth and productivity continues to be a matter of debate, even in the United States, which has been the leader and largest adopter of IT. There is no doubt that the IT sector has been a dynamic one in many developed countries, and in a developing country like India it has stood out in the form of software exports, despite the country’s relatively low level of income and development.

India is the world’s largest sourcing destination for the IT industry, accounting for approximately 67 percent of the $124-$130 billion USD market. The industry employs about 10 million workers. More importantly, the industry has led the economic transformation of the country and altered the perception of India in the global economy. India’s cost competitiveness in providing IT services, which is approximately three to four times cheaper than the US, continues to be the mainstay of its unique selling proposition (USP) in the global sourcing market. However, India is also gaining prominence in terms of intellectual capital with several global IT firms setting up their innovation centers in India.

The IT industry has also created significant demand in the Indian education sector, especially for engineering and computer science. The Indian IT and ITeS industry is divided into four major segments – IT services, business process management (BPM), software products and engineering services, and hardware.

The IT-BPM sector in India grew at a compound annual growth rate (CAGR) of 15 percent over 2010-15, which is three to four times higher than the global IT-BPM spend, and is estimated to expand at a CAGR of 9.5 percent to $300 billion USD by 2020. 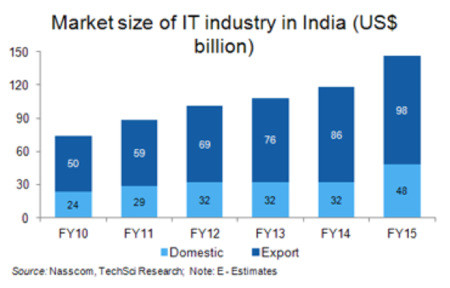 Indian IT’s core competencies and strengths have attracted significant investments from major countries. The computer software and hardware sector in India attracted cumulative FDI inflows worth $18.17 billion USD between April 2000 and September 2015, according to data released by the Department of Industrial Policy and Promotion (DIPP). Further deregulating FDI restriction is being discussed, and policymakers in India, as well as external observers, attach high expectations to FDI. In the critical face of the Indian economy, the government of India, with the help of World Bank and IMF, introduced a macroeconomic stabilization and structural adjustment program. As a result of these reforms, India has opened its doors to FDI inflows and adopted a more liberal foreign policy in order to restore the confidence of foreign constituted (Foreign Investment Promotion Board) whose main function was to invite and facilitate foreign investment. The government relaxed FDI norms in several sectors including telecom, defense, PSU oil refineries, and power exchanges, among others.

Here are the few statistics that shows the growth of IT and BPM industry in FDI.

Newer investment opportunities are opening up every now and then in the Indian information technology sector. The government of India released a comprehensive FDI policy document effective starting in 2010. The government has allowed the Foreign Investment Promotion Board (FIPB), under the Ministry of Commerce and Industry, to clear FDI proposals of up to $258.3 million USD. Earlier, all project proposals that involved investment of above $129.2 million USD were put up before the Cabinet Committee of Economic Affairs (CCEA) for approval.

Mauritius remains the top investing country for India during the period from August 1991 to March 2014. Investments from the country amounted to $82,133 million USD during this period, followed by Singapore and Japan. It shows that there has been a significant shift in the character of global capital flows to the India in recent years in that the predominance of private account capital transfer and especially portfolio investment increased considerably. 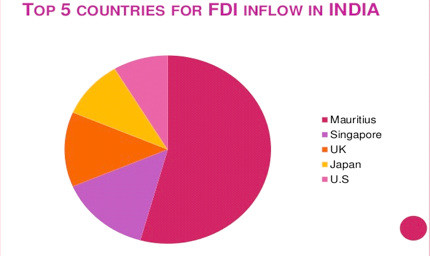 State-wise, FDI inflows show that Maharashtra, Delhi, Karnataka, Gujarat, and Tamil Nadu together accounted more 75 percent of inflows during 2000-2015 because of the infrastructural facilities and favorable business environment provided by these states. Despite troubles in the world economy, India continued to attract FDI inflows mainly because the Government of India opened up flexible investment regimes.

As per Indian government recent FDI polices, up to 100 percent FDI is permitted under the automatic route in data processing, software development and computer consultancy services, software supply services, business and management consultancy services, market research services, technical testing and analysis services. In a big jump, India has moved up 16 positions to rank 55th on a global index of the world’s most competitive economies, where Switzerland remains on top.

“Report of the economic survey.” Ministry of Finance, Government of India, New Delhi.

“IT AND BPM.” Make In India. http://www.makeinindia.com/sector/it-and-bpm.

Sanjeev Sharma is an Engineering Manager at Mentor Graphics’ Embedded Software ABU Division. He is a PMP Certified Professional over 12 years of experience in software industry, largely dedicated to embedded software.