At lunch the other day with my friend Paul Stevens of Advantech's Networking & Telecom Group, I asked how the Internet of Things (IoT) was impacting t...

In retrospect, networking in the IoT will be much like Paul’s lunch: fishing for key data (the scallops) in a sea of less-significant information (the peanuts), then clearing a path for that mission-critical data through the depths of phone calls, YouTube cat videos, and “House of Cards” episodes streaming over Netflix. To ensure those paths, network engineers are turning to Software-Defined Networking (SDN).

In short, SDN differs from other approaches to networking in that it utilizes a software layer to abstract the network control plane from the data plane (for a more complete overview, read “Infrastructure-as-a-Service Explained”). This philosophy enables network operators to better classify, group, and route various data packets, which effectively allows certain information to be prioritized so it can traverse the network more freely. In essence, this means that IoT applications sourcing status data from thousands of end nodes could flag various data sets as high-priority and send them across the lowest latency network path. It also turns traditional concepts of networking upside down in that the network is now altered based on the needs of the application, rather than the application being subject to network constraints. As network transmission costs look to be among the most expensive in the IoT infrastructure, this ability to earmark relevant data will be key to reducing Operating Expenditures (OPEX).

Spark Integration Technologies, Inc. is a network connectivity vendor based in Vancouver, British Columbia, whose flagship Distrix Gateway router is an embeddable, small-footprint SDN solution that provides IP and non-IP connectivity to existing applications and infrastructures (www.sparkintegration.com). The Distrix solution is essentially a network virtualization tool that uses a restful Application Programming Interface (API) to define and configure secure, end-to-end tunnels at different layers of the network, from basic Layer 2 Ethernet connectivity through the application layer [Layer 7 in the Open Systems Interconnection (OSI) model]. 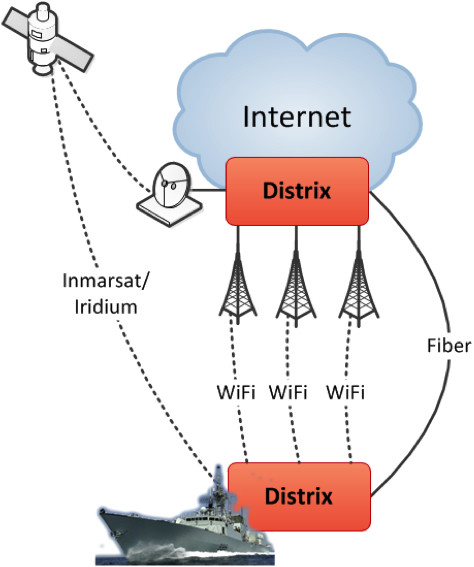 In addition to network configuration, the Distrix solution also provides a packet processing engine for Deep Packet Inspection (DPI) and monitoring streams that generate a real-time heartbeat for calculating network latency. Distrix then allows the application or management system to dynamically adjust the network based on available bandwidth and route traffic over the lowest-latency link.

The marriage of SDN and DPI technology in a single platform yields two key benefits for IoT networks, one of which is the opportunity for data reduction or consolidation of redundant traffic. The second is the previously mentioned prioritization, which can be conducted by establishing a second, separate tunnel for mission-critical data, or by identifying a traffic flow’s source port number.

Take, for example, a modern cruise liner that streams a variety of data, including critical ship telemetry data and Voice-over-IP (VoIP) from passenger cell phones and tablets. While at sea, an SDN system like Distrix would maintain satellite connectivity for ship-to-shore communications, giving priority to alarm and control information from the ship’s telemetry data. As the ship approaches shore, however, Distrix would then pick up cheaper cellular networks and Wi-Fi hotspot connections as they became available, essentially bonding multiple types of connectivity to maintain any ongoing network sessions while still ensuring a path for telemetry data.

Another benefit of the programmable network methodology found in SDN is that networks theoretically only exist based on the needs of the application, and therefore don’t necessarily have to be running 24/7, 365. Therefore, network operators can rest assured that vital information is always transmitted in real time, and also capitalize on the OPEX savings afforded by ‘on-demand’ networks.

We’ve saved some money and sorted the scallops. Let’s eat.