Environmental regulations now in place have major implications when it comes to implementing modern power-system designs. Government bodies in both No...

Environmental regulations now in place have major implications when it comes to implementing modern power-system designs. Government bodies in both North America and Europe are enforcing measures that mean efficiency levels must be improved significantly. For example, updates to the European Code of Conduct mean that if a 40-W power supply is to comply with the minimum average efficiency, then it has to exhibit a 1% better efficiency level than was adequate in 2014.

In addition, there’s another crucial factor coming into play, as OEMs heighten their expectations with regard to power adapters. Since the overall efficiency levels are being improved, power losses are as a result lighter. This means that there’s a provision for adaptor dimensions to be reduced (making them more attractive to end customers). In addition, unit costs can be curbed as smaller, less expensive heat sinks can be specified. Switching frequencies can also be increased, with the upshot that the size of the constituent magnetic components is lowered. The utilization of smaller magnetic cores further reduces system size, so that more compact enclosures can be benefitted from.

The dynamics of raising efficiency and reducing size are interrelated. To scale down power-system size, it’s necessary to limit power losses and increase conversion efficiency levels. In a flyback power supply, power losses can come from a number of different sources, such as the diode bridge and bulk capacitor in the power supply’s front end, the transformer, switching losses emanating from the primary switching MOSFET, the MOSFET clamping network, secondary side rectification, and the output capacitor.

Taking all of these elements into account, On Semiconductor has produced an evaluation board, the NCP1339GGEVB, designed to help engineers implement more efficient and compact power systems through the support of high-speed switching operation. Each fundamental part of the 58.7- by 38.2-cm board helps realize a degree of efficiency above 90% at full load, regardless of the input voltage. The controller used for this board, the NCP1339, is a quasi-resonant (QR) controller with a high-voltage (HV) startup current source and an X2-capacitor discharge function. An NCP4305 synchronous rectification controller sits on the secondary side. 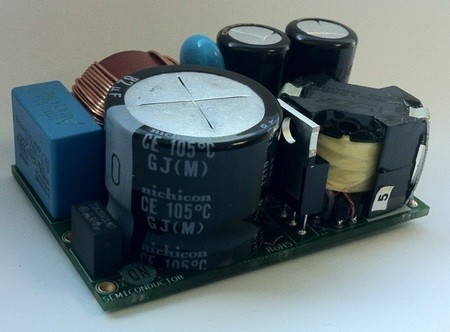 “Valley hopping” is a common problem experienced with QR operation. As the controller synchronizes with a valley occurrence on the drain (minimum voltage), any change occurring in valleys as input and output conditions change lead to discrete frequency steps. As the peak is frozen during this stage, an instability occurs and can potentially induce acoustic noise. The NCP1339, with its proprietary lockout circuitry, helps resolve this issue. Hence, when a valley is selected, the controller locks in and remains in this state until the feedback voltage increases or decreases significantly. This lockout function, combined with a voltage-controlled oscillator, means that the switching frequency excursion remains, regardless of the output power.

Yann Vaquette is an Application Engineer at ON Semiconductor. He graduated from the CESI engineering school in 2011. During his study, Yann worked part time with ON Semiconductor in Toulouse for three years before being hired as an application engineer in the ac-dc business unit. He works on designing high-frequency quasi-resonant flyback converters and he recently developed a high-density version of a 45-W notebook adapter.