For the Professional Maker: Making machines move when an MCU isn't the answer

If you're developing a device that needs to make something move at a set interval, the obvious solution for a MakerPro is to program a prototyping boa...

If you’re developing a device that needs to make something move at a set interval, the obvious solution for a MakerPro is to program a prototyping board like an Arduino with a delay function. This generally works well, but if you run into a situation where a microcontroller isn’t appropriate for whatever reason, remember that there are mechanical alternatives. After all, people have been using mechanical timers since medieval times. 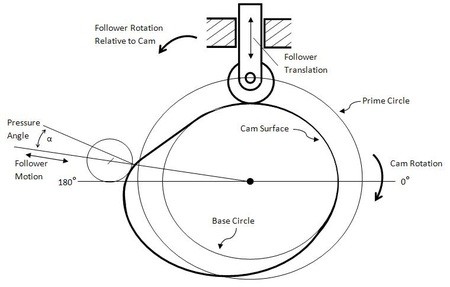 The most general form of mechanical timer is a cam-driven system. Cams take rotational motion, and through an off-center wheel, can produce linear motion at a set interval. Although the timing pattern can be difficult to modify, properly designed cams can run for decades without causing problems. Just look at combustion engines; they can run for hundreds of thousands of miles, which works out to be in the neighborhood of several hundred million cam cycles per cylinder.

For something to be able to repeat a motion like this for that many cycles (hopefully) without issue is an incredible engineering feat. On the other hand, if you want to change the timing that the camshaft came with, in normal circumstances you have to physically change the lobes (off-center wheel shape). Given that these are normally made of a hardened material, it takes quite a bit of effort. In computer terms, the timing is literally hard-coded. 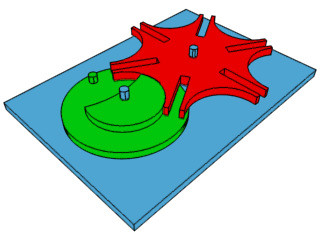 Another interesting mechanical timing device is called the Geneva Mechanism, or Maltese cross, which can translate continuous rotation into intermittent rotation, via a system of a driving wheel with a pin and a driven wheel with a set of slots. This ingenious device was used in movie projectors to display an image for a set amount of time, then quickly advance and show the next slide. It can also be used in manufacturing to time-dial assembly stations. As with cams, it’s extremely reliable, and possibly even less flexible.

Like cams, the Geneva Mechanism is a solution waiting for the right application. On the other hand, the device is especially entertaining to someone who enjoys mechanisms (like me). I built my own using MDF, cut using a CNC router, or you can 3D print one.

For a real-word example of what can be done with mechanical devices when needed, Konrad Zuse, in perhaps the greatest MakerPro feat of all time, assembled an electromechanical computer using mechanical logic gates. Making it even more impressive, he accomplished this in his parents’ living room in Germany while intellectually cut off from most of the word during World War II!

The machine had a cycle rate of 4 Hz, as opposed to today’s computers that can perform logic operations at several Gigahertz—around 1 billion times the speed of this historical device. Regardless, this machine was an incredible accomplishment, able to read from a punched tape and read and write to memory. You can now see a replica of it in the German Museum of Technology in Berlin.