Pi-Fi audio: A guide to getting started with the Wolfson Audio Card

The recently launched Wolfson Audio Card is the latest addition to the hugely popular Raspberry Pi. Its ability to record and playback hi-fi quality a... 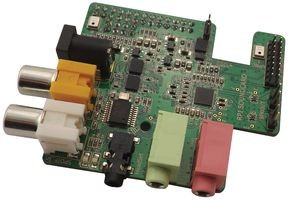 The recently launched Wolfson Audio Card is the latest addition to the hugely popular Raspberry Pi. Its ability to record and playback hi-fi quality audio using a range of input and output ports makes the board incredibly flexible at meeting the needs of any demanding media application.

All ports – input and output – provide the same maximum audio: stereo audio out, line out, integrated amplifier and SPDIF-out connections for output, alongside SPDIF-in, onboard digital MEMS stereo microphones and four-pole headphone jack for input.

Of the options available, connecting the board to an external set of PC speakers or a sound system would be preferable. However, connecting a 5 V power source will allow you to take advantage of the built-in amplifier, though this is only designed to output 1.5 W of power. Output to a good sound system or high-end set of headphones and you’ll be surprised at the power and clarity of the audio the Raspberry Pi is now capable of producing.

Setup
Setup of the Wolfson Audio Card is simple and can take as little as five minutes. First, insert an SD card in to the Pi. This will be used for storing the operating system on the device, as well as providing local storage capacity for audio files. Pre-existing Pi owners will likely already have an operating system installed and set up, so more proficient users can download the driver source code for compiling to the kernel themselves.

If you’re not comfortable compiling your own software, or are starting from scratch, download the pre-compiled Raspbian distro to the SD card. Once installed, insert the card in to the Pi and follow instructions to reach the Debian desktop.

If you want to just use it for playing local audio files, you can stop here, however the limited space offered by SD storage means most people will require network connectivity. Decide on a Wi-Fi or Ethernet connection that matches your network hardware. Your setup is now complete!

Project ideas
Beyond media playback, there are countless other potential uses for the Wolfson Audio Card. The Wolfson drivers integrate directly in to the ALSA sound device, meaning audio playback and recording is accessible at the OS level by all applications.

Another idea is to turn the Raspberry Pi in to a VoIP client. Plug a headset into the 4-pole headphone jack, install the Wolfson drivers and an SIP client, and you’re ready to make free Internet-to-Internet calls. There are a wide array of SIP clients available for Linux, many of which are supported by the Pi. There are even projects dedicated to bridging VoIP to Skype, such as OpenSkype. You could even look set up a second Pi as an Asterix server, attaching additional Raspberry Pis as clients of this.

For gamers, the steady rise in the number of Pi compatible games means the Wolfson Audio Card will prove useful. The most high profile project has seen Quake 3 ported to run on the Raspberry Pi, based on the ioquake fork, which brought with it much-improved audio. Using the Wolfson Audio Card, therefore, vastly improves the game playing experience. Meanwhile, applications like Mumble finally delivers the in-game calling features many online players were missing.

Another potential application area is in music production. The Wolfson card’s inputs capture audio at the same quality as its outputs playback, meaning there is no quality lost between instrument and speakers. In fact, with the huge array of music production software packages available that support the ALSA interface, most users should encounter no difficulties in getting the best possible performance out of their existing studio setup.