IPv6 over Bluetooth Smart takes wearables from smartphone to standalone

Smart watches such as Magellan's Echo can transmit and receive data from a smartphone for up to 11 months from a single CR2032 coin cell.

Just a decade ago, wearable electronics was a niche technology targeted at early fitness gadget adopters, and used proprietary technology. Now wearable devices have become the latest hot toys for the mass market. Analyst Markets&Markets estimates that the “global wearable technology ecosystem’s” value will reach $14 billion by 2018, growing at a compound annual growth rate (CAGR) of more than 18 percent between 2013 and 2018.

The contemporary market is typified by the smart watch – a device that brings the functionality of a smartphone to the wrist in a convenient and (sometimes) stylish package. The current crop of smart watches has been made practical by the 2010 introduction of Bluetooth v4.0, which included Bluetooth low energy as a hallmark element.

Bluetooth low energy (known to the consumer as “Bluetooth Smart”) is an ultra-low-power wireless link compatible with the Bluetooth Smart Ready technology embedded in most smartphones. In the last several years, major technology companies such as Apple, Google, and Microsoft have announced native support, including APIs, for the latest version of Bluetooth technology. This support makes it much easier for engineers to develop wearables that leverage associated smartphone-based apps to maximize their usefulness.

Moreover, Bluetooth Smart requires very little battery power, helping conserve the life of the host wearable device’s small-capacity cell. Smart watches, such as Magellan’s Echo, can transmit and receive data from a smartphone (while also allowing a user to control smartphone functions like music replay from their wrist) for up to 11 months from a single CR2032 coin cell.

But as impressive as smart watches are, their functionality relies on the close presence of a smartphone to provide heavy computational lifting and Internet connectivity. Tomorrow’s wearables will be far more powerful products able to operate independently of mobile devices and function as standalone “things” connected to the IoT. Some of these products are already in development thanks to a new generation of powerful Bluetooth Smart SoCs that integrate processors with sufficient power to communicate directly with other devices on the Internet and run complex applications, all while boasting modest current consumption to extend battery life.

From gateways to bridges

Today, Bluetooth Smart wearables can only connect to the Internet using the smartphone as a gateway. The software and computational power that manages data transfer to the Internet resides on the mobile device (Figure 1). This is an acceptable solution for an “Internet of my Things” (personal wireless peripherals linked to the user’s smartphone) but impractical for future wearables that will need to operate autonomously. 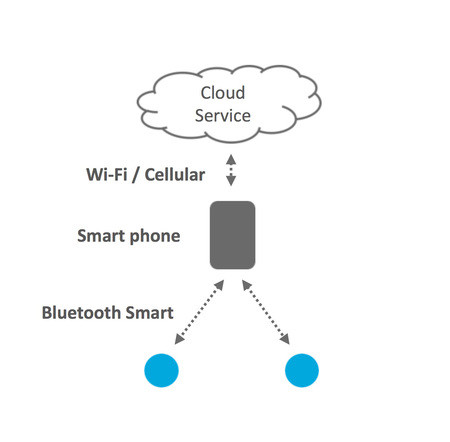 IPv6 is gradually superseding IPv4 as the addressing and communication protocol of the Internet because it provides dramatically more individual IP addresses for the anticipated trillions of things that will make up the IoT. IPv6-enabled Bluetooth Smart things can talk to other IPv6-enabled things (even if they use incompatible wireless technology) without requiring the intermediary services of a gateway (Figure 2). 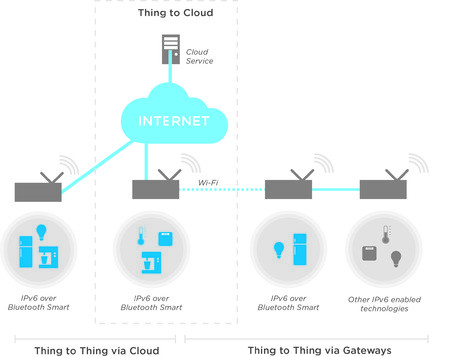 In addition to using smartphone gateways, next-generation wearables will connect to the cloud via inexpensive headless routers that act as bridges, relaying information to other devices on the Internet without performing any analysis or manipulation (Figure 3). These bridges won’t require sophisticated operating systems and so will be inexpensive to produce and deploy. In addition, millions of devices that are already in service but were previously incompatible with Bluetooth Smart sensors – such as set-top boxes or Wi-Fi routers – will be able to act as routers. 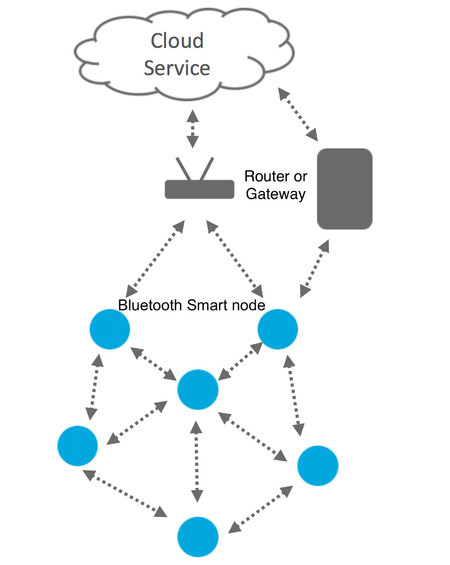 But how easy is it to add IPv6 capability to a Bluetooth Smart device? The answer is: far from trivial. Fortunately, the Bluetooth Special Interest Group (SIG) has made things a little easier with the introduction of the Internet Protocol Support Profile (ISPS), compatible with Bluetooth v4.1 and later.

Previous generations of Bluetooth Smart SoCs, which typically used embedded ARM Cortex-M0 or -M3 processors, were capable of running IPv6 over Bluetooth Smart. Nordic Semiconductor, for example, released a complete IP stack on top of its Bluetooth Smart software running on the nRF51 Series SoC as far back as December 2014. With this, developers could use an IoT Software Development Kit (SDK) compatible with Arduino and Raspberry Pi platforms to create a headless router for use when experimenting with Bluetooth Smart devices communicating over a heterogeneous IP network.

But IPv6-ove-Bluetooth Smart operation, while practical for relatively simple applications such as temperature or humidity sensors, leaves little processor overhead within ARM Cortex-M0 or -M3 processors and a shortage of RAM and Flash memory to run the kind of complex applications demanded by consumers of standalone wearables. Developing such products today would likely demand the resources of an additional (external) processor and memory, resulting in more design complexity, a larger, device and greater power consumption – hardly a recipe for a market-leading wearable.

Rather, the next generation of wearables demand Bluetooth Smart SoCs with sufficient computing performance and memory allocation to run an IPv6 over Bluetooth Smart stack with plenty in reserve to power a suite of complex applications. And the chip will need to do this with a lower power consumption than contemporary solutions so that battery life in tomorrow’s wearables is not compromised. Just to make things a little more complex, the wireless link (which could be used to send health, financial, and other sensitive personal data) needs to be highly secure. It’s one thing to transmit unprotected data across a Bluetooth Smart link to a smartphone in your pocket, and quite another to send it tens of meters to (possibly a public) router.

Fortunately, IPv6 is fundamentally more secure than IPv4. The technology includes, for example, IP Security (IPsec) which provides interoperable, high-quality and cryptographically-based security services for traffic at the IP layer (IPsec was optional in IPv4 but has been made mandatory in IPv6). IPsec provides authenticity, integrity, confidentiality, and access control to each IP packet through the use of two protocols: Authentication Header (AH) and Encapsulating Security Payload (ESP). The downside is that the extra security adds to the processor’s load.

However, some recently introduced Bluetooth Smart SoCs are capable of meeting the demands of powerful wearables communicating via IPv6 over Bluetooth Smart. Nordic’s offering, which was released in sample volumes to developers in June 2015 and will enter volume production by the end of the year, is the nRF52 Series.

At its heart, the nRF52 Series SoC has a 64 MHz ARM Cortex-M4F processor that delivers up to 60 percent more generic processing power, adding up to ten times the floating point and twice the DSP performance compared with ARM Cortex-M0/M3-based Bluetooth Smart solutions. To make the most of the processor’s performance, ensure support for complex applications, and allow for comprehensive over-the-air firmware updates, the SoC includes 512 KB Flash and 64 KB RAM.

The IoT is in its formative years and many technical challenges remain before its promise is realized. But most industry observers agree that proliferation will rely on the “things” making up the network speaking the same language in order to limit complexity and cost. IPv6 is the preferred protocol for Internet communication, and manufacturers of wireless products of various flavors – including Bluetooth Smart, IEEE 802.15.4 and Wi-Fi – are adapting their technologies to include IPv6 transport layers.

Wearables, as an established market with a growing consumer base, is a technology sector that’s poised to make the leap from the Internet of my Things to IoT proper by taking advantage of a slew of new Bluetooth Smart SoCs. These single-chip solutions have the processing capability to support IPv6 over Bluetooth Smart communications and complex software without requiring the resources of a smartphone. Such capability opens up thousands of new applications for wearables beyond the current smart watch and fitness bracelet niches.

John Leonard is a product marketing manager at Nordic Semiconductor.