While Arduino compatible programming-wise, this board isn?t actually made by Arduino, and can instead be found on SparkFun in both a 3.3V and 5V variants.

Today, if you need to develop a new project, there are a wide variety of boards from which to choose. I’ve gone over several, including the Arduino Nano, and Adafruit Trinket, both of which are quite small—especially the Trinket. For another tiny option, you might also consider the so-called “Arduino” Pro Micro. While Arduino compatible programming-wise, this board isn’t actually made by Arduino, and can instead be found on SparkFun in both a 3.3V and 5V variants, as well as on auction sites via a quick search.

Programming-wise, the board is similar to an Arduino Leonardo, with its onboard ATmega32U4 chip providing I/O as well as HID capabilities. This HID interface is one of this board’s best features, and means that not only can it interact with the real world using it’s I/O pins, but can also interact with your computer directly as a virtual keyboard/mouse. It connects via micro-USB, meaning that unlike the bulky full-sized B socket of the UNO or mini-B of the Nano, the connector that you use to charge your phone could work in a pinch. When selecting cables, however, be sure that what you use isn’t a power-only version, a problem I’ve run into before when working with an ESP8266 board.

Real-world interface consists of 9 x 10-bit ADC capable pins, along with 12 digital I/Os, five of which are PWM capable. So as not to confuse things, there are a total of 18 I/O pins which can be used for I/O, PWM, RX/TX, and analog functions, as some pins are capable of multiple interface methods. 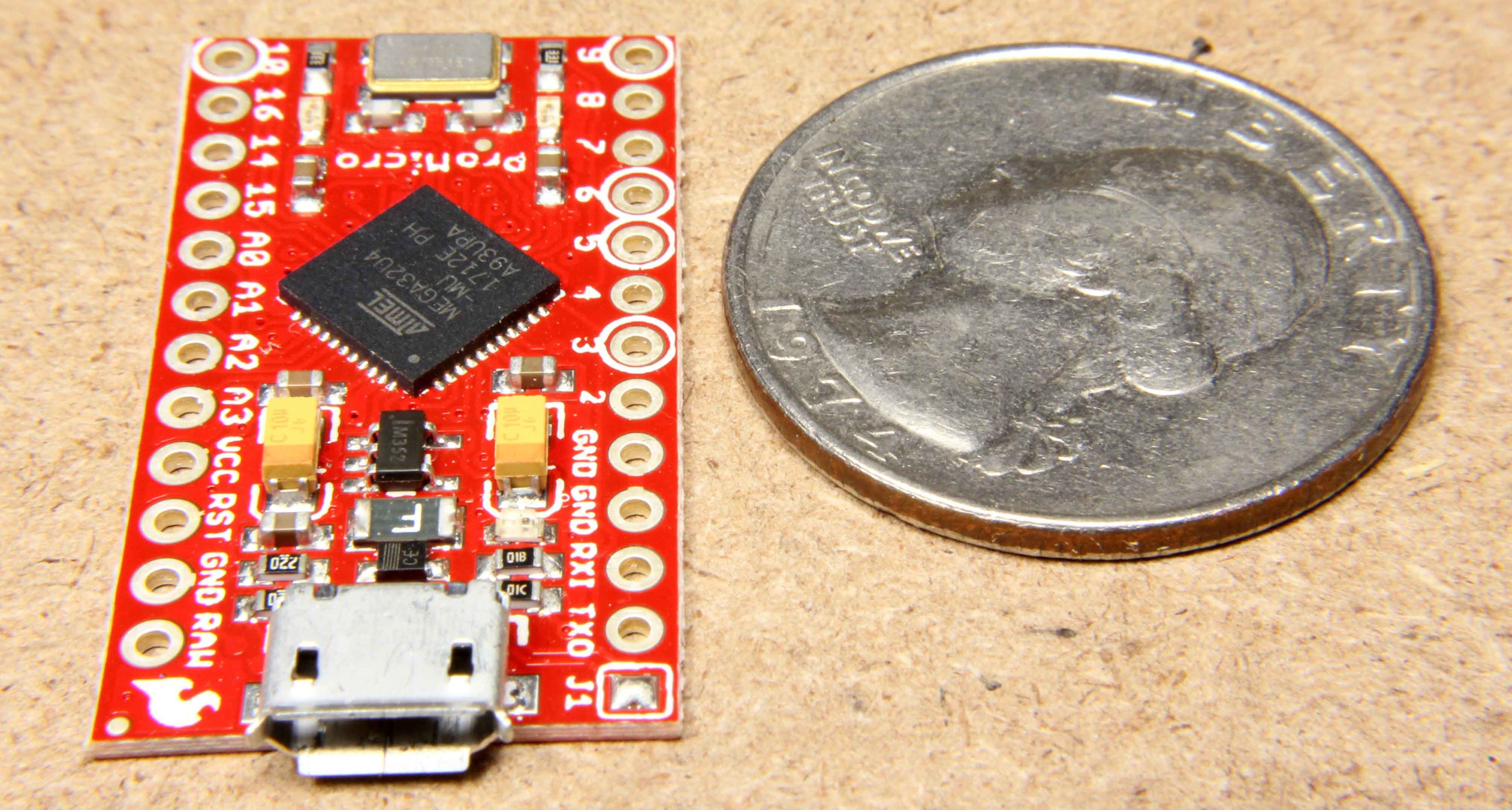 Of course, the characteristic feature of this board is its minuscule size. At 1.3” x .7” (roughly 33 x 18mm), it’s smaller than the Nano, but larger than the Trinket board. I/O capabilities of these three boards somewhat mirror their respective sizes, as the Pro Micro features far more options than the Trinket is capable of, and is slightly below the Nano in this respect if you’re not factoring in its HID abilities. Another thing to consider is that the Nano does appear to be better supported with accessory boards and breakouts, potentially helpful depending on your project.

One thing to watch out for when deciding on a Pro Micro board is that if you don’t know what you’re looking for, you may end up buying the wrong thing, or at least being confused by the various labels that it’s known by. The most important thing to look for is that it contains an ATmega32U4, though if you want to be sure you’re getting the right thing, the SparkFun board would be a good, though relatively expensive option. Making things even more confusing is the fact that Arduino does carry a board called the Arduino Micro, and even has a retired board called the Arduino Pro Mini. As far as I can tell, however, there has never been an official “Arduino Pro Micro board,” even if you can find plenty of options that claim some version of that name on their listings.

If that all sounds daunting, the good news is that once you actually do get one of these boards, you simply set up the Arduino IDE to talk to a Leonardo in order to upload the code that you’ve written. For compact applications, the Pro Micro is certainly a good option, and could be the perfect board for your next project!